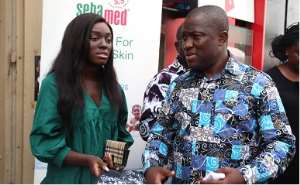 The Mayor of Accra, Mohammed Adjei Sowah recently paid a visit to the Minshee Free Creche at Okaishie Drug Lane to applaud the founder of the creche and see what kind of help the Assembly could offer to the facility.

The mayor stated that the efforts of Georgina Omaboe needed to be commended because at such a young age, she had been able to think of a way to help the less fortunate.

He said if every individual would follow in the footsteps of Omaboe, the poor in the country could have some relief.

On behalf of the Accra Metropolitan Assembly, Sowah vowed to help the facility by adding them to their welfare list and also with painting of the facility, among others.

Minshee (meaning Happiness) is a free creche facility set up by Omaboe to help infant children of head porters (kayayei) in the business district of Accra, Makola, get a safe place away from the hustle and bustle of Makola.

During an interview, Omaboe mentioned that “growing up, she used to help her mother out at her pharmacy shop in the Okaishie District. It was during that period that she noticed that most of the children of the kayayei were normally behind their parents, while they worked or they were left to play around the market. She also mentioned that some of the kayayei that she was friendly with, used to leave their children with her while they went to work.

Through this, she came up with an idea to set a sort of daycare for these children so that they could get a place to come to everyday while their parents went out to work. The facility in the beginning was funded by the family of Omaboe (her family paid for the space that the creche is currently situated in) as well as from Omaboe herself.

She however mentioned that recently, she had set up a website and solicited for funds from school mates (she currently schools in California).

Omaboe hopes that she can get enough funding to make this creche bigger and hopefully start sponsoring the kids when they get to primary, junior and senior high school.