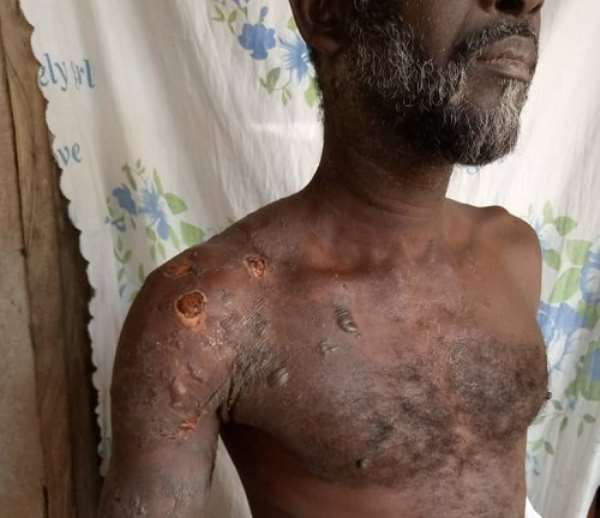 A teacher with Kumfia Municipal Authority School in the Atebubu Municipality, Baani Yahaya, is battling for his life after he was sprayed with hot water in his face.

The wicked act was allegedly perpetrated by a man only named as Atta after the teacher had demanded from him full amount of money being the cost of a motorbike he (victim) sold to him.

Mr. Yahaya sustained severe injuries on his right arm, chest, shoulder and other parts of his body, and is currently on admission at Fakwasi CHPS compound in the municipality.

He said on radio at Atebubu on Monday that he sold his motorbike to Atta for GH¢1,400 and he made part payment of GH¢400, with a promise to pay the remaining amount later.

“After two weeks, I went to his house to demand the remaining amount of GH¢1,000. He entered his kitchen, brought out a can of hot water… and poured it on me without any provocation,” he recounted.

He said he did not see anything until he regained consciousness to realize he had been rushed to Fakwasi CHPS compound where he is currently being treated.

A unit committee chairman of the area, Paul Kwadwo, confirmed the incident to DAILY GUIDE, saying Atta was on the run.

He said Mr. Yahaya would be assisted to report the incident to police after being discharged from the hospital.