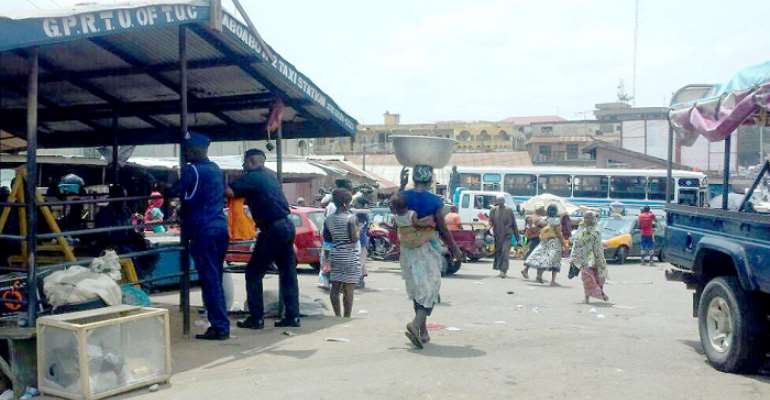 There is escalating tension at the Koforidua main Lorry Station in the Eastern Regional capital between two transport unions.

Executives of Reform Liberty Cooperative Transport society are up in arms with newly established transport union -King Jesus Transport owned by some bigwigs of the ruling New Patriotic Party, attempting to operate at the lorry terminal.

The new transport union was formed by Edward Marfo Boateng, a Vice Chairman of NPP in New Juaben North Constituency. He was chairman of the Reform Liberty Co-Operative Transport society but kicked out of office over alleged financial malfeasance having chaired the union for 20 years.

On Monday, January 20, 2020, a gang of about 20 machomen allegedly hired by embattled Edward Marfo Boateng, stormed the main lorry station at about 2:am to forcibly commence operation of his parallel transport Union without due process.

The situation would have turned chaotic but for the timely intervention of the police swiftly deployed to the Station. The Police maintained a presence at the station for about four hours. No arrests was however made.

Addressing the media on Tuesday, the Executives of Reform Liberty Cooperative Transport Society accused some bigwigs of the NPP in New Juaben North and South of attempts to use political powers to perpetrate illegality.

Chairman of Reform Liberty Cooperative Transport Society, Kwabena Antwi, said they will resist any attempt to operate another transport union at the already congested lorry terminal.

“Edward is using nepotism because he knows much of NPP Peoples he thinks NPP is his own bu NPP is for all Ghanaians. So we can’t sit down for Edward to use political nepotism to come and destroy as here. So we are pleading to the government that if he didn’t stand up for this action that Edward is putting up, he will definitely destroy the NPP party especially the Vice Chairman of NPP-New Juaben South-Bernash”.