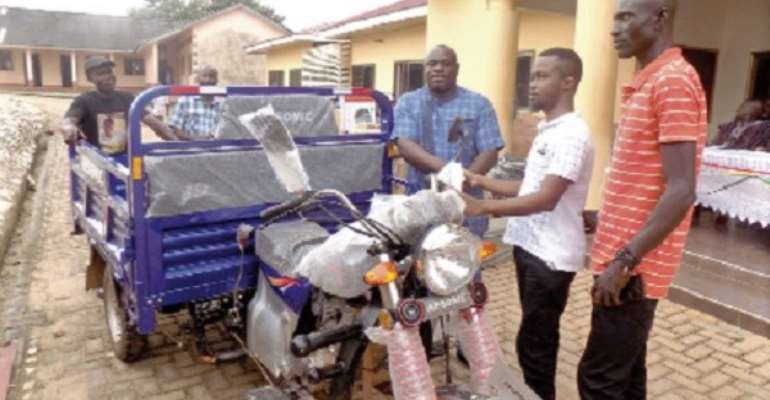 The Denkyembour District Assembly in the Eastern Region has presented business start-up equipment valued at GH¢182,930 to 105 people with disabilities in the district.

The students in tertiary institutions among the beneficiaries were given cash to pay their school fees and some pocket money.

During the presentation ceremony at Akwatia last Thursday, the District Chief Executive (DCE) for Denkyembour, Mr Seth Birikorang–Ofosu, advised the beneficiaries to use the items for their intended purpose in order to improve their livelihoods.

He said the assembly decided to present them with equipment instead of cash because experience had shown that those who were given money previously misused it rather than using it for trading activities so as to get profit.

Monitoring
Mr Birikorang – Ofosu said a monitoring team would go round to see the progress of the businesses of the beneficiaries.

He advised the beneficiaries against selling the items, warning that those found going contrary to the directive would not be spared.

The DCE said with the presentation of the business start-up equipment, the beneficiaries had no excuse to go and beg on the streets.

According to him, it was the fourth time since 2017 that people with disabilities in the district had been presented with such items which brought the total amount to GH¢500,000.

Disability not inability
The Member of Parliament (MP) for Akwatia, Ms Mercy Adu-Gyamfi aka Ama Sey, said disability was not inability and, therefore, advised the beneficiaries to make good use of the items and use the profits accrued to enhance their living standards.

The District Chairman of the Disability Common Fund, Mr Daniel Kwame Osei-Bonsu, also advised the beneficiaries not to abuse the gesture as they would be the losers eventually.