'Pablo Escobar of eggs' faces justice after 35 years of poaching 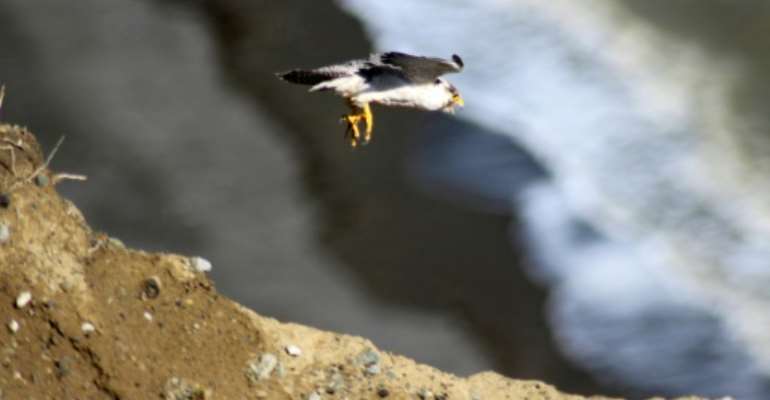 The main drivers of egg poaching are wealthy clients in the Middle East, where peregrine falcons are in great demand for traditional falconry and can sell for thousand of dollars, according to the wildlife trade specialists Traffic. By HO (SAG/AFP/File)

Jeffrey Lendrum spent three decades living as the so-called "Pablo Escobar of eggs", smuggling the fragile shells from the nests of falcons and other birds of prey to wealthy international clients.

During a full search, he was found to be wearing a body belt made out of bandages concealing 19 eggs from vultures, falcons and kites as well as two newly-hatched African fish eagle chicks.

His body belt was designed to "brood" his stash so the chicks would not die before he sold them.

A British court sentenced the 58-year-old Irish-Zimbabwean to more than three years in prison in January last year.

But he now faces another court appearance on Wednesday, which could see him spend up to three more years in jail in South America, if Britain accepts an extradition request.

He is wanted for skipping bail in 2016 after a Brazilian judge sentenced him to four and a half years for attempting to smuggle peregrine falcons out of the country.

Stealing bird eggs runs in the family: the veteran thief received his first conviction aged 22, when he and his father were found guilty of petty theft in Zimbabwe.

Jeffrey Lendrum was found to be wearing a body belt of bandages concealing eggs from vultures, falcons and kites as well as two newly-hatched African fishing eagles chicks His body belt was designed to "brood" his stash so the chicks would not die before he sold them. By HO (CROWN PROSECTION SERVICE/AFP/File)

He has since served time in Canada, Brazil and Britain.

The main drivers of egg poaching are wealthy clients in the Middle East, where peregrine falcons are in great demand for traditional falconry and can sell for thousands of dollars, according to the wildlife trade specialists Traffic.

Illegal trade in animals is worth nearly $20 billion each year, according to Interpol.

But Traffic spokesman Richard Thomas said there are "fewer than half a dozen" reported cases of egg thefts around the world each year.

However, the thefts are "not insignificant" and still constitute "serious crimes", he told AFP.

"Some of the species involved are extremely rare and even small numbers (of eggs) illegally taken from the wild can have a significant impact on threatened populations," he added.

The smuggler's 35-year notoriety is such that "Lendrum is a well-known name to conservation charities working on illegal bird trade issues", said Thomas.

In 2010, he was stopped at Birmingham International Airport in central England with egg boxes strapped to his chest.

Nicknamed "the Pablo Escobar of eggs" by the British press after the Colombian drug lord, Lendrum has amazed readers with the audacity of his crimes.

He has been arrested five times on three different continents. Details of his crimes contrast with the grey-haired, potbellied man, half-naked and wrapped in strips of cloth, after his arrest.

Lendrum, once a member of the Rhodesian army's special forces, even used a helicopter during a theft in northern Quebec, hanging from a rope to get close to the nest, according to Joshua Hammer, in "The Falcon Thief", the book he wrote about Lendrum's exploits.

The Financial Times called Lendrum "the world's greatest bird of prey thief" but Thomas warned against turning him into "an anti-hero".

"Rather, I think the publicity around his regular convictions helps demonstrate that persistent offenders will be caught and receive increasingly more severe punishments," he said.