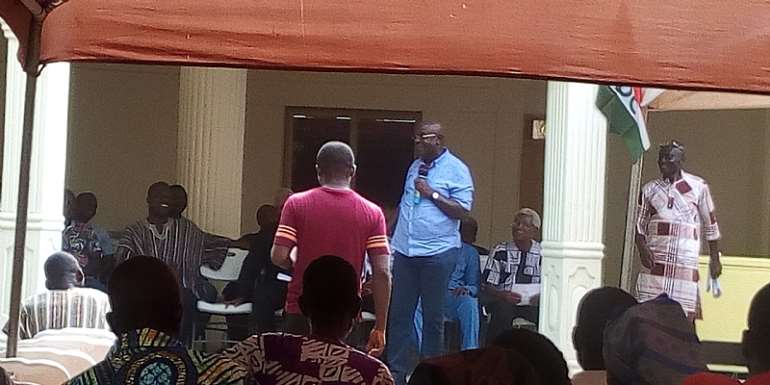 The former speaker of Parliament and the former Legislator for Akatsi south constituency of the opposition National Democratic Congress (NDC), Hon. Edward Kobby Doe Adzaho has called on members of the party in the Akatsi South constituency to put their differences behind and foster unity for a massive victory in elections 2020.

Addressing branch executives and sympathizers of the umbrella fraternity in his welcome speech at a get together organized by the Constituency chairman, Mr.Anthony Owusu( WESTFELIA) in the district capital, Akatsi on Tuesday 21st January 2020, Hon. Doe Adzaho explained the need to have a united party, with a call on every member of the opposition National Democratic Congress to patch up differences that rose during the constituency elections and the 24th, August 2019 Parliamentary Primaries election.

He also cautioned against allowing their differences to divide them as he said that could greatly affect the fortunes of the party in its efforts to reclaim power from the super incompetent New Patriotic Party government.

He said the huge task of returning to power is a responsibility of all members and would need nothing less of a united party to come out of the triumph.

Mr. Ametepe, the Volta Regional Chairman of the NDC, charged the branch executives to change all those working against the fortunes of the NDC in the subsequent Constituency elections.

According to them, the political space is such that those who hold on to grudges and do not forgive will always be on the losing end.

“One thing is that it is difficult to forgive when someone wrongs you. But in politics, if you don’t build the habit of forgiveness, you will always be at the losing side”.

So we are appealing to the executives o of the party in the Akatsi South Constituency to put aside all differences so that we can work in unionism for victory in 2020, 7th, December.

The former speaker seized the opportunity to appeal to the ruling New patriotic party to complete all the Abandoned projects in Ghana most especially those the NDC started In the Akatsi South Constituency.