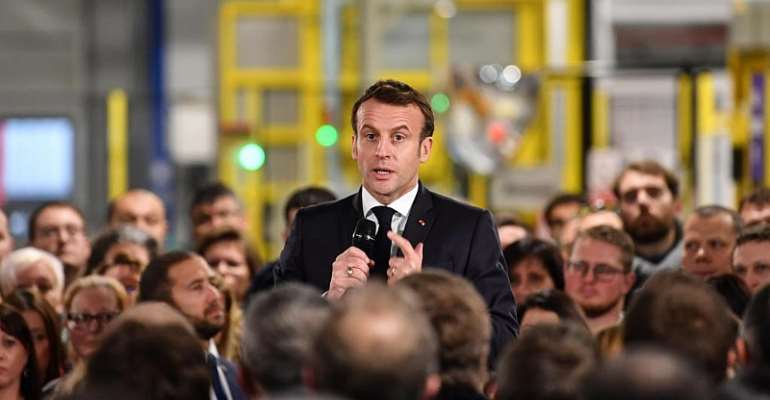 Weeks of strike action and protests may have caused all manner of disruptions but they don't seem to have put off foreign investors. On Monday, France secured eight billion euros' worth of investments from top firms at the end of a key business summit, seen as a warm-up to the World Economic Forum in Davos.

French President Emmanuel Macron may have had little to smile about these past few weeks due to protests against his pension reforms, but on Monday, he relished the "good news" by several top firms to commit eight billion euros' worth of investments to the country.

"Good news never comes alone. They come because we carry out reforms," Macron said during a visit to a pharmaceutical factory in northern France.

The French leader was speaking ahead of the third "Choose France" summit at Versailles, where he arrived to welcome 200 of the world's top business leaders.

Before heading to the Swiss Alps for this year's Davos summit, chief executives descended on the chateau of Versailles for a private gathering showcasing France's economic appeal.

The uncertainty has been disruptive but "no more than that" for one key business partner.

Place to be
"Some of our employees have had difficulty to travel and commute on a daily basis," comments Laurent Bouyer, chief executive of Bombardier France, a global transportation company that manufactures trains for state rail operator SNCF.

"And we've had some difficulties when it comes to delivering some trains because some of our employees were on strike, so obviously yes there was a bit of disturbance there," he told RFI.

But not enough to put Bombardier off.
"We have understood early on, that it was the country to be in," he said referring to Bombardier's initial launch in France back in December 1989.

When the Canadian group, best known for building planes and trains, first set up shop in the northern town of Crespin, it "had no products and was a subcontractor to other manufacturers," Bouyer explains.

Thirty years on, "our industrial site in Crespin is now the biggest railway factory in France," employing 2,000 employees and 6,000 indirect workers and suppliers.

The ingredients that allowed the group to thrive are still in place today.

Incentives
"It could be a tax element, facility for transport, help for accommodation for employees, there are all sorts of mechanisms in place at the national, regional and local level, which do help to attract investors," Bouyer adds, saying he was not surprised other foreign investors are following suit.

"I'm happy to see that other investment, foreign investment or national investments are being made, it's very positive for the country."

Bombardier is hoping to contribute to that inrush.
"We've invested over 150 million euros over the past years in terms of our industrial capacities, tools, recruitment. And we're going to invest in 2020 as we did in 2019, probably in the range again of 30, 40 or 50 million."

Teething problems
Last year, the transportation company and its rival Alstom, were awarded a contract to design and manufacture a new generation of metros for Île-de-France Mobilités and the Paris Transport Administration (RATP).

"In terms of new orders, we have a big pipeline again this year, probably a bit more than 1.5 billion euros" to respond to the demands of Paris' growing population and an ageing rail fleet.

Bombardier Transport is well known for commercialising some of the colourful trains that skit across the country everyday when there are no strikes.

In recent months, it has also come under fire for technical glitches experienced on its double deck Regio 2N trains for France's regions.

Bouyer admitted there had been some teething problems but blamed it on infrastructure problems.

"The difference with aerospace which we also do is that you are very much linked to infrastructure. When you are facing a complex infrastructure in the Paris region with other trains, other networks, obviously there is a period of time where we need to stabilise the whole system," he said, before adding that the trains had now "reached their reliability target."

A model of the high-speed train was on display at the Elysée Palace Friday during the exhibition Made in France, part of a series of events promoting all things French and that are produced here.