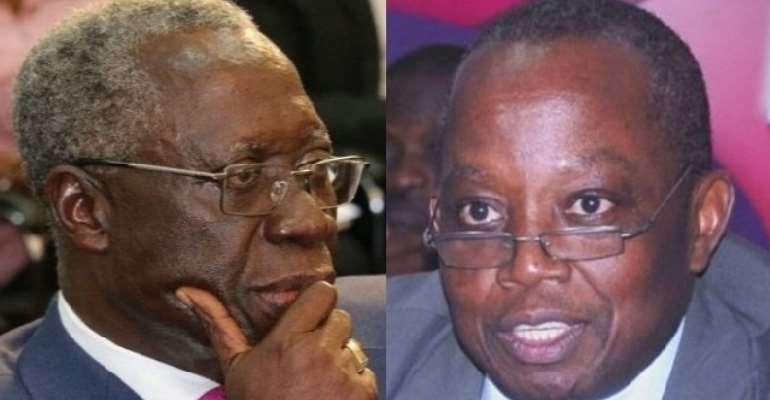 The Senior Minister, Yaw Osafo-Marfo, is asking the court to among other things commit the Auditor General to prison, or otherwise, punish him for his alleged contemptuous conduct in accordance with the law.

This was after he cited the Auditor-General, Daniel Yaw Domelevo for contempt over the $1m Kroll payment surcharge.

Mr Osafo-Maafo and four other applicants who are officials of the Ministry of Finance had sued Mr. Domelevo.

Mr. Osafo-Maafo through his lawyer, Yaw D. Oppong, argued that the Auditor General’s refusal to file the required documents at the court and reply to the Notice and grounds of Appeal within the mandatorily stipulated time dictated by Rule 5 (1) and (2) of Order 54 A of the High Court (Civil Procedure Rules) 2004 CI47 pursuant to amendment by C1102, constitutes a contempt of court.

This, the Senior Minister believes exposes Mr. Domelevo’s supposed contrived scheme which according to him is “deliberately fashioned to achieve his [Domelevo’s] own invidious agenda and also with a view to preventing the Court from efficiently ascertaining the full circumstances of the case.”

“That the refusal of the Respondent to file the relevant documents and a reply contrary to the relevant provisions of the law is a confirmation of our conviction that the Respondent in taking the decision against us and the subsequent resort to media propaganda to damnify us, and disparage our hard-earned reputation, he was actuated by malice and lack of good faith and without legal basis whatsoever,” he argued.

An order committing the Respondent to prison; or in the alternative for the imposition of any other punishment that this Honourable Court may deem just and proper upon the grounds contained in the accompanying affidavit in support.

Consequential orders, including the setting aside of the Respondents’, said impugned decision against the Applicants

Any other or further orders that the Honourable Court will deem meet.