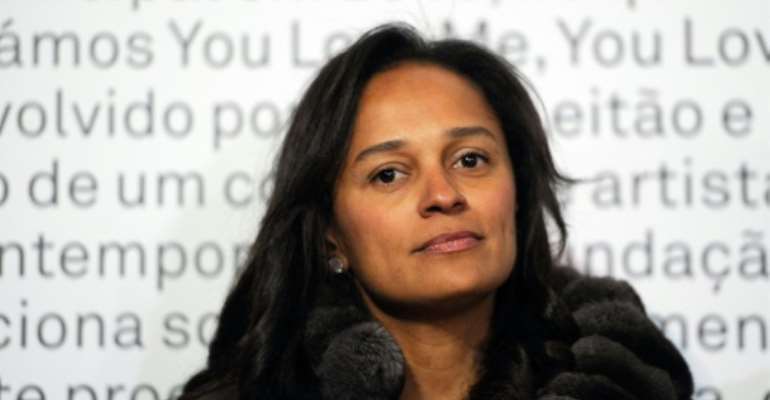 Isabel dos Santos has been tagged 'Africa's richest woman' by Forbes magazine, which estimated her wealth last year at more than $2 billion. By FERNANDO VELUDO (PUBLICO/AFP/File)

The "Luanda Leaks" scoop, published on Sunday by some of the world's top media outlets, has put pressure on Portugal's government and some major corporations to explain what they know and what they did.

A trove of 715,000 files charges that vast sums were siphoned out of Angola, an oil-rich country whose citizens are mostly mired in poverty, and then stashed abroad, including in Portugal.

"Our investigation highlights a broken international regulatory system that allows professional services firms to serve the powerful with almost no questions asked," said the International Consortium of Investigative Journalists (ICIJ), which led the probe.

"The looting of the Angolan people was led by Isabel dos Santos and her family with the complicity of the Portuguese political and economic elite," the national coordinator of Portugal's radical Left Bloc, Catarina Martins, said Monday.

Ana Gomes, a former socialist MEP, said: "Portugal and many Portuguese are shown around the world to be accomplices, through acts or omission, of the Angolan kleptocracy."

The public prosecutor on Tuesday vowed to "analyse any information that has become public."

Foreign Minister Augusto Santos Silva declined to comment when questioned on Monday, apart from asserting the independence of justice authorities and financial regulators.

Dos Santos has assets estimated by Forbes magazine at $2.1 billion (two billion euros). Among many Angolans, her wealth and privileged status have earned her the nickname of "The Princess."

The 46-year-old tycoon has long been a figurehead for Angolan investments in Portugal, which intensified after the financial crisis that hit the country's former colonial master in 2011.

She and her associates hold major stakes in at least 17 Portuguese companies.

The holdings include the media giant NOS in partnership with the Portuguese-based Sonae group, which said it was following the Luanda Leaks scandal with "attention and concern".

The magnate also has a major holding in Galp Energia, a major Portuguese energy group. The company declined to comment when reached by AFP.

The Eurobic bank, for its part, said it cut off all "commercial ties" with dos Santos, its principal shareholder, after allegations that it helped her transfer ill-gotten funds.

It said in a statement that it would convey the findings of an audit to Portugal's central bank, the Banco de Portugal, which said said it would "act accordingly" to the Luanda Leaks allegations.

"Over the past years, the Banco de Portugal has closely tracked Eurobic's activities," it added, rejecting criticism that it had turned a blind eye to dos Santos's activities.

After lawmaker Gomes lodged a complaint against dos Santos over alleged money laundering, Portuguese judicial authorities confirmed early this month that they had opened a probe.

The daily Publico reported that another investigation has been under way since 2011.

But there have been no indictments to date -- and when President Joao Lourenco paid a fence-mending visit in 2018, Lisbon pledged to help him recover any embezzled funds that had wound up in Portugal.

Luanda Leaks, which originated from dos Santos's financial management firm based in Portugal, is published at a time when dos Santos is under investigation in Angola.

Prosecutors last month froze bank accounts and holdings owned by her and her husband Sindika Dokolo.

They are suspected of diverting more than a billion dollars (900 million euros) from the national oil giant Sonangol and diamond company Endiama.

Dos Santos stopped living in Angola after her authoritarian father Jose Eduardo dos Santos, who ruled the country for nearly 40 years, stepped down in 2017 for his anointed successor, Lourenco.

She denies the allegations against her and says she is the victim of a witch hunt.

Arrest Any Chief Involved In Galamsey - NPP Communicator
1 minute ago