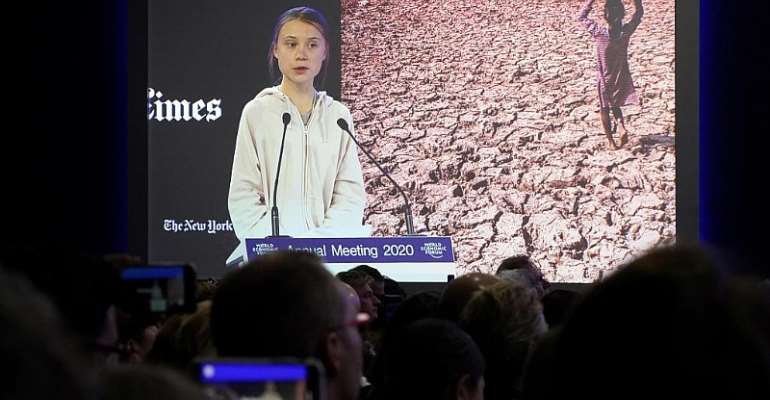 Greta Thunberg and Donald Trump faced off at the World Economic Forum in Davos Tuesday, with the teenage activist pressing leaders to avert a “climate apocalypse” and the US President calling for a rejection of the “perennial prophets of doom”.

Climate change is dominating the agenda at the 50th annual summit of the world's most powerful business and political leaders in the Swiss Alps.

During one of two appearances, the 17-year-old Thunberg told a packed audience of policymakers that their “inaction is fuelling the flames by the hour" – warning that time is running out to effectively tackle the climate emergency.

She cited a landmark 2018 report by the International Panel on Climate Change (IPCC) that found urgent action was needed to limit global warming to 1.5 Celsius to avoid the worst impacts of global warming.

“With today's emissions levels, the remaining budget is gone in less than eight years. These aren't anyone's views, this is the science,” Thunberg said.

Speaking a few hours later, Trump warned against "predictions of the apocalypse", adding that the America was “winning like never before” and was prepared to defend its economy.

Global temperatures over past decade are about 1.1C above the average for the pre-industrial period, with carbon emissions reaching a record high in 2019.

Scientists say that limiting warming to 1.5C will mean reducing emissions to net-zero by the 2050 – something the European Union has signed up to under its trillion-dollar European Green Deal.

“At a time when there is no real agreement among everybody in the world, Europe has stepped up as the largest bloc of countries really committed to the net zero target,” says Dr Frank Rijsberman, director general of the Global Green Growth Institute – a Seoul-based inter-governmental agency that helps countries transition to a greener economy.

In December the Cop25 summit ended without achieving the two main goals of the Paris Agreement: establishing rules for a global carbon market, and compensating frontline countries for the loss and damage already being felt as a result of climate change.

“I was in Paris when the Paris Agreement was reached almost miraculously – and that was probably the last time the whole world community signed up to one single deal,” Rijsberman says, adding that countries such as the US, Australia and Brazil sadly now need extra convincing.

More than 50 heads of state and government and thousands of business leaders are attending Davos, which runs until Thursday.