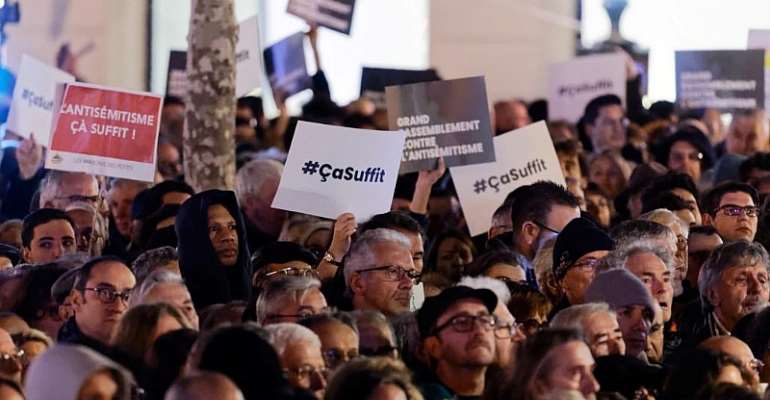 As French President Emmanuel Macron prepared to travel to Israel on Tuesday for an official visit marking the liberation of the Nazi concentration camp at Auschwitz 75 years ago, findings of two polling institutes reported highlighted concerns over anti-Semitism in France.

Macron was to arrive in Jerusalem on Tuesday evening ahead of a two-day official visit packed with commemorations and meetings with other world leaders to mark the 75th anniversary of the liberation of the Auschwitz-Birkenau concentration camp by the Soviet Red Army.

After a brief visit to the France-administered Church of Saint-Anne in East Jerusalem, Macron was to join representatives of some 40 countries for an official dinner on Wednesday evening.

On Thursday, Macron planned to pay tribute to deported French Jews at a memorial at Roglit, west of Jerusalem, inaugurated in 1981.

Before participating in a ceremony on the liberation of Auschwitz, Macron was to address the French community of Israel in regards to anti-Semitism in France, according to the French presidential office.

Anti-Semitism a persistent concern
Two surveys carried out in France and Israel suggested lingering anti-Semitic attacks and incidents in France contributed to a mitigated perception of Macron and his administration.

A joint survey by French think tank Fondapol and the American Jewish Committee found 70 percent of Jews in France said they have been victims of anti-Semitism at least once in their lives, including 84 percent of those aged 18-24.

The poll found 73 percent of the French public and 72 percent of French Jews said anti-Semitism affected all of society.

A separate poll prepared by French institute Ifop for Israeli television I24News found 66 of Israelis considered that the French government did not do enough to counter anti-Semitism and that 60 percent believed French Jews were not safe in France.

The poll showed 28 percent of Israelis believed French government policy was favourable to Israel. Only 36 percent had a positive opinion of Macron, compared to 57 percent for US President Donald Trump.

The positions of Macron's administration have not always aligned with Israel's expectations.

Last month, France's lower house of parliament approved a non-binding resolution to recognise anti-Zionism as a form of anti-Semitism in a move welcomed by Israel.

On the other hand, Macron's administration last week condemned Israeli policies that have intensified the development of colonies in East Jerusalem and the West Bank.

Macron has also sought to mediate between the United States and Iran, which Israel suspects of seeking to build nuclear weapons.