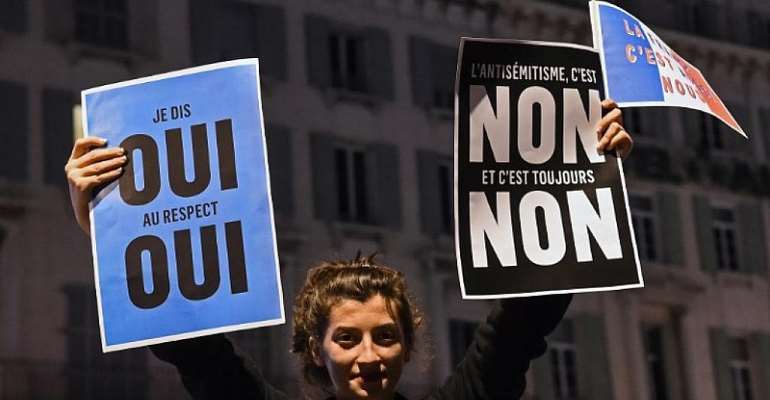 As the number of attacks on Jewish people in France continues to rise, new research by the American Jewish Committee (AJC) found that many Jewish people currently fear for their safety.

The AJC Paris survey found that 70 percent of French Jews say they have been victims of at least one anti-Semitic incident in their lifetime, 64% have suffered anti-Semitic verbal abuse at least once, and 23% have been targets of physical violence on at least one occasion, with 10 percent saying they were attacked several times.

'Hiding' Jewish
As a result, many Jews have taken action to avoid being targeted. The survey, polled 505 French Jews and 1027 French people between October 14 and November 19, 2019, shows that 37%, refrain from using visible Jewish symbols, 25% avoid revealing their Jewish identity in the workplace, and 52% have considered leaving France.

Overall, 44% of the Jewish sample say the situation for French Jews is worse than a year ago, only 11% say it is better and 42% no better or worse.

The attacks are not restricted to a single age group with young people taking the brunt of the attacks as they are more likely to confront attackers than older people. Amongst youngest Jews, ages 18-24, the research found:

Visibly religious French Jews feel the most vulnerable, with 74% of them saying they had been a victim of at least one act of verbal abuse, compared with 64% of the full Jewish sample.

54% were victims of verbal abuse, and 26% had been victims of anti-Semitic violence in schools.

But equally disturbing is the finding that 46% said they had suffered anti-Semitic verbal abuse in the workplace.

The AJC Paris study was conducted by IFOP, a leading polling firm, in partnership with Fondapol, a major French think tank.

Nearly three-quarters, 73%, of the French public, and 72% of Jews, consider antisemitism a problem that affects all of French society. 47% of the general public and 67% of the Jewish respondents say the level of antisemitism in France is high, while 27% and 22%, respectively, say it is low.

The findings come as no real surprise as thee have been a number of significant anti-Semitic attacks in recent months.

Anti-semitic attacks
Last year, police had to intervene to protect Jewish philosopher and writer Alain Finkielkraut after he was targeted while leaving his home by a group of protestors during a demonstration in central Paris last February.

In 2018, thousands gathered in the east of Paris for a silent march to condemn the gruesome killing of an 85-year-old Jewish woman, one of several anti-Semitic attacks that have rattled France's Jewish community.

And it has even been detected in the political system. In 2017 Gerard Filoche, a member of the Socialists' national bureau, was expelled after sending out an anti-Semitic tweet. There have also been a number of attacks on Jewish cemeteries over the past few year too.