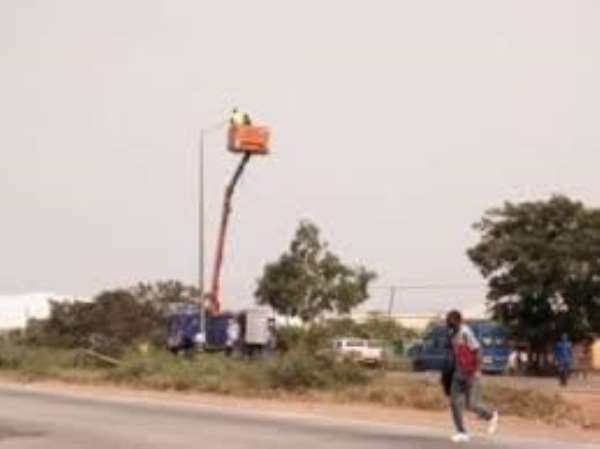 A street lighting project on the Tema Motorway has commenced.

Described by the experts as a retrofitting exercise, it was started a couple of days ago and entails the provision of LED lights from Tetteh Quarshie Interchange to the Sidalco company stretch of the motorway towards Tema.

The project has been necessitated by persistent public outcry, especially motorists, about the darkness which provides impetus for criminals operating along the stretch. Motorists too have had bitter experiences along the dark motorway.

The Ministry of Roads and Highways had earlier given an assurance that the malfunctioning street lights would be replaced.

The Accra-Tema motorway was built in 1964 under Kwame Nkrumah's government to link Tema to the national capital. In 2017, the Ghana Highway Authority (GHA) estimated that between 57,000 and 89,000 vehicles used the highway daily but poor illumination had remained a major problem.

Sometime in 2002, the government abandoned its plan to light up the motorway to coincide with the country's 50th independence anniversary celebrations following a series of challenges including cable, transformer and lamp thefts which delayed its completion. The problem led to plain-clothed policemen patrolling the motorway.