Residents In Five Tamale Communities Compete With Animals For Water 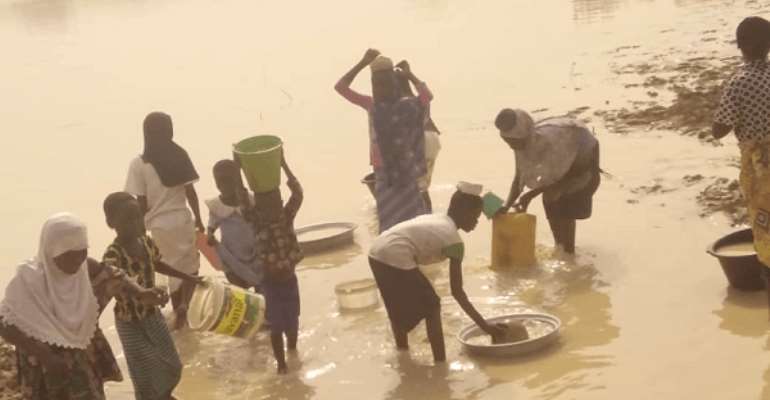 Some residents fetching polluted water from the dam

At least five communities in the Tamale Metropolis in the Northern Region have been hit with acute water shortage, compelling residents to compete with animals for water from a nearby dam.

The communities - Chanshegu, Jonshegu, Zujung, Kukuo and Dohini - depend on the only dam constructed at Chanshegu decades ago which is fast drying up due to the harmattan.

The communities, which have a total population of about 5,000, have been battling with the situation for the past years, compelling them to resort to the untreated water for domestic and commercial activities.

The dam also serves as the only source of water for animals in the area, which urinate and defecate in it anytime they have their fill, exposing the residents to water-borne diseases.

A visit to the communities by the Daily Graphic saw that the water had become reddish and muddier as a result of increased activities, which makes it more difficult to treat before use. Some women and children were also seen standing in the dam fetching water as it does not have any spot specifically reserved for the people to fetch water from without stepping into it.

Reactions
Some residents who spoke to the Daily Graphic said they had been drinking the untreated water for the past years because they have no means of treating it.

“Apart from the struggle we go through every day to get the water from the dam, it is not safe for consumption but we don’t have the means to treat the water; we have been drinking the water for the past years, especially during the harmattan season and now we are used to it,” Mariam Seidu, a resident of Chanshegu said.

Another resident, Ayishetu Baba, said aside the health risk of drinking the untreated water, her shea butter business had also collapsed because she was not able to get clean water to process the butter.

Apart from the health implications, the current situation also comes with a financial burden on the inhabitants who are subsistence farmers as most of them who cannot trek to the dam spend money hiring the services of tricycles to draw water for them.

Appeal
The Assembly member for the Chanshegu Electoral Area, Mr Sulemana Fuseini, in an interview expressed fear that the dam was likely to dry up in the coming days due to the severity of the harmattan which would make life unbearable for them.

“If the dam dries up, we have no option than to rely on private water suppliers from outside the community, which is very costly. This is making the cost of living in the area very costly since about 95 per cent of the people are peasant farmers,” he said.

He said several complaints to the Ghana Water Company Limited (GWCL) to ensure water supply to the communities had proven futile, adding, “we went there several times to lodge the complaint but they didn’t pay attention to it. They only told us that maybe the line they connected for us had no water pressure.”

Mr Fuseini appealed to the GWCL, the government, non- governmental organisations and other stakeholders to come to the aid of the affected communities with potable drinking water to release the people from the distress they are currently encountering.

Allegation
Checks by the Daily Graphic saw some pipes laid throughout the Chanshegu community years ago to supply water to the area but community members said no water had ever passed through their taps.

The residents accused the GWCL of laying the pipes in the communities without supplying water to them.

However, when contacted, the acting Northern Regional Chief Manager of the GWCL, Mr Amidu Musah, refuted claims that the GWCL laid the pipes and failed to supply water to the communities.

“We have not laid any pipe in the area, it is recently that we got to know that pipes have been laid in the communities so I am sure the community members did it themselves,” he said, adding that they company was working around the clock to ensure that the pipes were connected onto the GWCL system to ensure water supply to the communities.