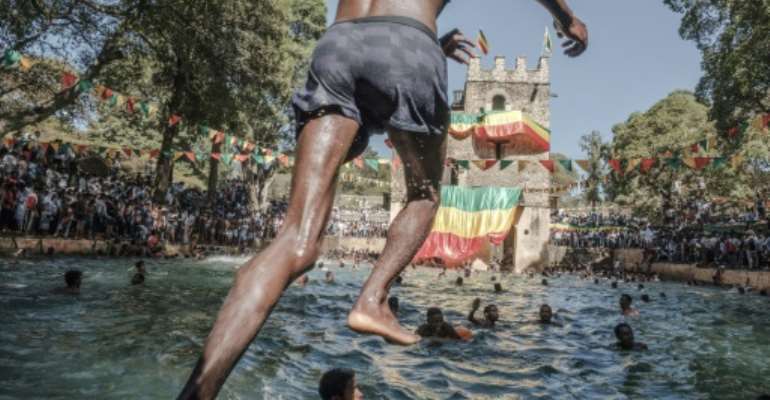 Timkat celebrates the baptism of Jesus in the River Jordan. By EDUARDO SOTERAS (AFP/File)

Getahun Fetana spent years admiring Emebet Melaku from a distance before plucking up the nerve to speak to her, taking advantage of a chance encounter during Timkat, the Ethiopian Orthodox celebration of epiphany.

Breaking off from his friends, the 37-year-old professor walked over to introduce himself, and the sparks that flew led to their wedding on the very same holiday one year later.

"We got married on Timkat because we wanted to remember it as a breakthrough in our relationship," Getahun told AFP. "The day has a special place in our hearts." 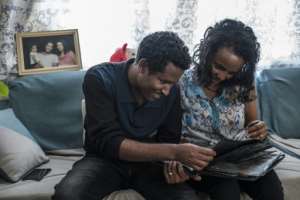 Getahun Fetana and his wife Emebet Melaku met during the festival and fell in love. By EDUARDO SOTERAS (AFP/File)

It is far from the only Ethiopian love story closely bound up with Timkat, which Orthodox Christians celebrated Monday with feasts and elaborate processions across the country.

The holiday, which commemorates the baptism of Jesus in the River Jordan, was marred this year by the collapse of a wooden seating structure during a pivotal ceremony in the northern Ethiopian city of Gondar, an accident that left at least 10 people dead.

But it is generally a sunny and joyous affair -- and one that offers a choice meeting ground for young singles on the hunt for romance.

First, the holiday comes at the height of wedding season, meaning love is already in the air.

The fact that it's also the dry season means the country's roads are in good shape, making it easier to travel and meet new people.

Finally, worshippers don their finest traditional clothing on Timkat, including pristine white robes and tunics accented with the greens, reds and yellows of the Ethiopian flag.

There's even a saying -- "Let a dress not meant for Timkat be shredded" -- suggesting that Timkat clothes are the only ones worth keeping.

"Everyone is dressed to impress," Aschalew said. "Everyone attends Timkat clean and fresh, and this creates an opportunity for dating."

The most famous Timkat celebrations take place each year in Gondar, the former seat of the royal empire located 700 kilometres (435 miles) north of the capital, Addis Ababa. 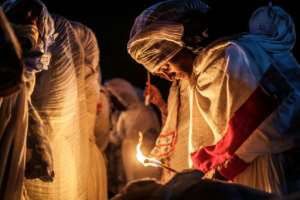 The celebrations take place in Gondar, the former seat of the royal empire. By EDUARDO SOTERAS (AFP/File)

Before dawn on Monday, thousands of people gathered at stone baths constructed during the reign of 17th-century Emperor Fasilides.

The ceremony during which the seating area collapsed -- in which worshippers dive into holy water to recreate Jesus' baptism -- was meant to cap a weekend-long traditional celebration that last month was inscribed on UNESCO's list of Intangible Cultural Heritage of Humanity.

For many young people, though, the main event came the day before, as tens of thousands of Ethiopians and foreign tourists marched alongside priests carrying cloaked tabots -- replicas of the Ark of the Covenant -- amid a riot of song, dance and prayer.

This is when young men and women have typically sparked up conversations that can lead to relationships. 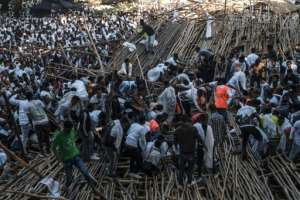 This year's celebration were marred by an accident in which at least 10 people died. By EDUARDO SOTERAS (AFP/File)

One Timkat custom calls for young men to throw lemons at women they find attractive, aiming for the heart to signal their intentions.

But while lemon-throwing is still common in rural areas, it is increasingly out of fashion in Ethiopia's fast-growing cities.

A common joke in Gondar is that instead of throwing lemons at their crushes, young men today would do better to throw iPhones.

'Back to our old ways'

For Aschalew, the tourism official, this reflects a broader shift away from traditional dating habits, as Ethiopian youth explore new ways to meet partners.

"These days there are plenty of platforms for dating. People meet at the workplace or in school, and technological advancements mean they can meet on Facebook," he said.

Aschalew described this as an "acceptable" result of modernity, but some Gondar residents told AFP they believed the old customs should be revived. 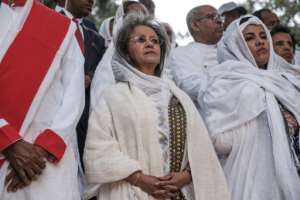 "People who find their spouse on Timkat are getting a gift from God," said Rahel Mola, a 37-year-old Gondar native.

She was celebrating with her daughter, 20-year-old Katim Tewodrose, who bemoaned the fact that no boys had thrown lemons at her.

"It's our tradition and I don't think it's practiced anywhere else, so I'm patiently waiting for someone to throw a lemon at me," Katim said.

Their nostalgia was shared by Tariku Munye, 33, who took part in Sunday's procession.

"Our elders used to embrace Timkat dating, but now we have gotten away from it. I think we need to go back to our old ways," he told AFP.

"You never know," he added, "you could find your destiny here."