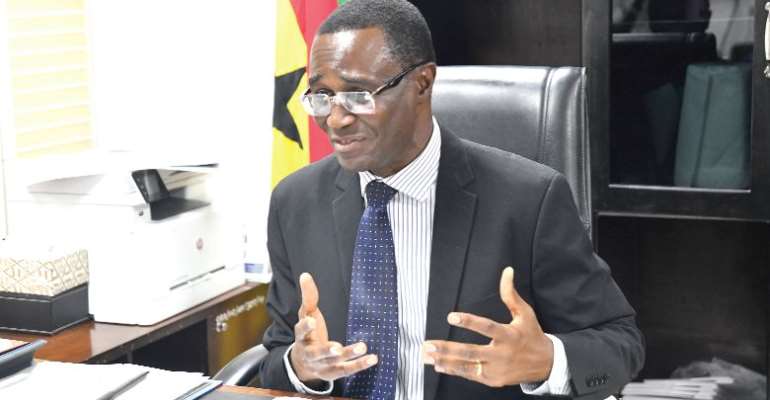 The Ghana Revenue Authority (GRA) has issued 3.74 million tax identification numbers (TINs) to individuals since it started issuing the numbers in 2012.

The acting Commissioner-General of the GR A, Mr Amisshaddai Owusu-Amoah, who disclosed this to the Daily Graphic, said for this year and subsequent ones, the target of the authority was to register two million people each year.

He explained that the only way to get everybody into the tax net was through the issuance of TINs, adding that the authority was working assiduously to ensure that every taxpayer was registered.

“To get everybody on TIN, we are lining up with third parties, where TIN is included as a requirement for accessing some services offered by the third parties, including the regulatory bodies, banks, drivers licensing, social security services and mining companies,” he said.

Since 2017, the GRA had been collaborating with the relevant agencies and third parties, such as the Social Security and National Insurance Trust (SSNIT), the Lands Commission and banks on the use of TINs for transactions.

Currently, the GRA has that collaboration with the mining industry, which provides it with data on its suppliers to ensure that they pay the right taxes on the services they render to the mines.

Mr Owusu-Amoah said the GRA had also set up an office which would be responsible for data matching, where artificial intelligence (AI) software would be deployed to match and determine whether people paid taxes as much as they earned.

Tax stamps
He indicated that last year saw a good performance in the tax stamp, which is mostly affixed to excise products.

An excise tax stamp is a specially designed digital stamp with security features affixed on specified excisable goods in the country, whether locally manufactured or imported, to show that taxes and duties have been paid or will be paid on them.

The products include alcoholic and non-alcoholic beverages and tobacco products.

The GRA, in 2018, introduced a sliding scale policy for the collection of the tax stamps to encourage the local use of raw materials.

The scale, which indicated a tax incidence of between 10 and 70 per cent range, ensured that the more local raw materials a beverage company used, the less tax stamps they paid.

Tax stamp measures
The authority embarked on a lot of enforcement and monitoring of the system to ensure that companies affixed the stamps.

“We arrested and prosecuted not less than five persons. Sometimes, the amounts involved and the fines were small, but the rationale was to use the culprits to serve as deterrents to others,” the commissioner-general said.

The GRA also carried out a lot of education for voluntary compliance and also introduced an application (app), the Ghana Tax Stamp Authenticator, that allowed the public to help in the monitoring process to ensure compliance.

“This is an innovative intervention which allows people with android phones to authenticate whether what is on the product is genuine. You will even know whether the person is paying lower tax and whether the product belongs to the manufacturer advertised on it,” he explained.

The excise tax stamp policy was first introduced in 2015 but faced some challenges that caused its withdrawal.

The Ministry of Finance again introduced it in August 2017 as part of the government’s effort to address the counterfeiting of products on the market and improve revenue generation, ensuring that more businesses paid taxes.

The GRA, in September 2018, began the full implementation of the Excise Tax Stamp policy.

The enforcement involved the confiscation and prosecution of non-compliant members of the public who did not affix the tax stamps on their excisable products.