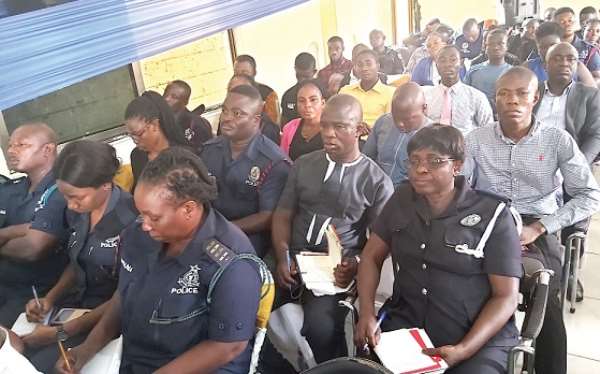 The Bank of Ghana (BoG) has started a nationwide financial sensitisation programme to educate personnel of the Ghana Police Service on banking services as well as their rights as consumers of financial services.

This forms part of the BoG’s efforts to involve the service which it considers as a key strategic partner in its quest to build public confidence in the financial sector.

Personnel of the service are expected to be taken through the functions of the various financial institutions regulated by the BoG, as well as other financial topics.

According to her, findings after the recent banking sector clean-up revealed that the general public was unaware of the differences in the functions of the financial institutions regulated by the central bank and that necessitated the need to educate security personnel as part of efforts to maintain integrity in the financial sector.

“It is important for everybody to understand that there are differences in terms of the institutions we regulate. Each of these institutions meet different regulatory requirements.

We want to ensure that the police service understands our expectations in the process of weeding out unethical behaviours in the sector, especially in the area of unlicensed financial service operations,” she stated.

“We have seen too many fingers burnt in the recent past.

We have seen too many people lose money.
It is our definite hope that it doesn’t happen anymore.

We are doing all we can to engage key stakeholders such as the police service to ensure we are able to mobilise ourselves to enforce the laws strictly,” Mrs Awadzi said.

Call
Mrs Awadzi called on the police service to help the BoG to ensure that the various regulated financial institutions operated within the confines of the licences issued them.

“If any police finds anybody or financial institution engaging in financial services that are not regulated by the BoG, or receives complaints from the public on any unlawful financial activity, they should not hesitate to draw our attention, “ she encouraged

Appreciation
For his part, the Greater Accra Regional Commander of the Ghana Police Service, DCOP Fredrick Adu Anim, expressed his appreciation to the BoG for deeming it prudent to educate personnel of the police service on banking services and their rights as consumers.

He entreated the police personnel present to put into practice the knowledge acquired from the sensitisation programme.