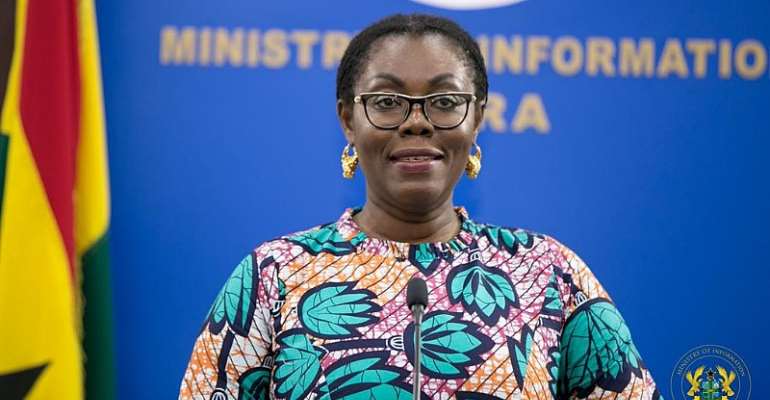 The purpose of the meeting was to update stakeholders on the current status of the project and also solicit their inputs.

During the meeting, she emphasised that no group of stakeholders was more important than others and the inputs provided by the majority would be considered, stressing that the government was committed to ensuring the active participation of all stakeholders in the digital migration process, as their inputs were necessary for its success.

The minister reported that the switching of the process from analogue to digital terrestrial technology was in its final stages, and the Digital Switch Over (DSO) was set to begin by mid-year.

She also briefed them on the coverage measurement on signal quality of the DTT network infrastructure which showed current population coverage of almost 90%, with broadcasting signals.

“… The 42 transmission sites nationwide have been completed and all connected to the National Electricity Grid,” the minister disclosed.

Mrs. Owusu-Ekuful added that the Central Digital Transmission Company (CDTC) would facilitate the smooth interaction between broadcasters and the platform operator, stressing that the mandate of CDTC would be to manage and operate the infrastructure which would offer transmission services to broadcasters and not to control the content provided by broadcasters (i.e. channels) to be transmitted.

The participants were also informed that the DTT policy provides for an effective and efficient collection of TV licence through the use of technology to ensure revenue generated is used to sustain the public broadcaster, the DTT infrastructure and facilitate local content development.

The introduction of DAF, however, will require all citizens to acquire new digital Set Top Boxes (STBs) which are compatible with the NCA's recently published standards, according to the minister.

She debunked assertions that it was illegal for the NCA to publish the standards for the National DTT network or that the Ministry of Communications had doctored standards published by the Ghana Standards Authority (GSA).

She explained that while the GSA had published MINIMUM standards applicable in the country that did not preclude any entity including the NCA from utilising enhanced standards on their network.

Mrs. Owusu-Ekuful called on the public to disregard the misinformation that her ministry through the NCA acted contrary to the rules. She said the ministry was working with all stakeholders and would utilise the best technology available to facilitate the full implementation of the law.

She urged players in the industry to desist from deliberately misinforming the public on DTT issues since the project has enormous benefits for the country.

She said the economy is projected to benefit from the creation of at least 10,000 new jobs when the project is completed.