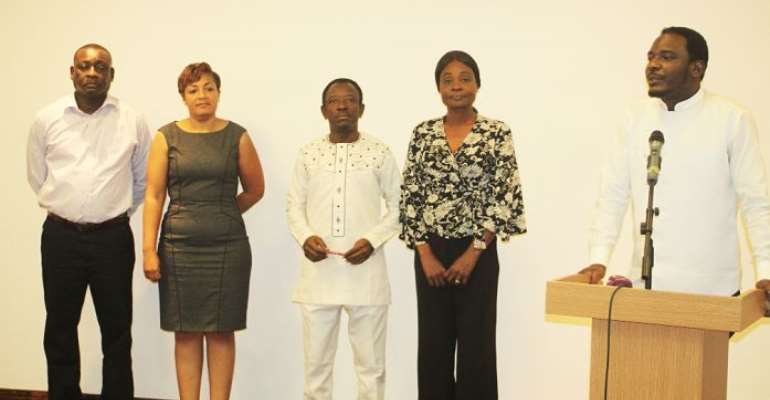 Mr Gilbert Odjidja (right), President of the E-Waste Round Table Association, speaking on behalf of the executive after the inaugural ceremony. Those with him are the other members of the executive. Picture: GABRIEL AHIABOR

The Environmental Protection Agency (EPA) has started collecting the ‘Advanced Eco Levy’ on some imported electric and electronic products on a pilot basis after the process stalled last year because of resistance from importers.

The Head of Hazardous and E-waste unit of the EPA, Mr Hobson Agyapong, who made this known, said the pilot phase began this month with importers of industrial tyres used by big trucks and air conditioners.

He was speaking at the inauguration of Electronic Waste Round Table Association (EWROTA), a body of formal sector e-waste management companies, in Accra yesterday.

The executive of the association, who were sworn into office at the event, are Mr Gilbert Odjidja as the President; Ms Vivian Ahiayibor as the Vice-President and Mr Richard Boadi-Soadwa, General Secretary.

Eco levy
The idea is to be able to raise funds to support the collection and disposal of those items in an environmentally sound manner as they are worn out.

It was also meant to provide sustainable funds for waste management and move away from relying on donors for money to manage waste in accordance with Section 21 of the Hazardous and Electronic Waste Control and Management Act, 2016 (Act 917).

The Eco levy, which was supposed to have taken off on November 1, 2018, required that all electrical and electronic equipment, as well as tyres exported to Ghana would have to be registered on the e- environmental platform deployed by Societe General de Sureillance SA (SGS).

However, the initiative stalled because importers and Ghana Union of Traders Associations (GUTA ) resisted it for lack of deep consultation.

Progress
Mr Agyapong said all obstacles had been cleared for the levy to be implemented.

"We are happy that the importers and exporters, as well as GUTA and freight forwarders, have now understood the need to collect the fund and are in full support of it”.

“We are anticipating to add additional eight this week to make it 10. We will observe it for some time and roll out fully to cover all electric and electronic goods,” he said.

Boost to e-waste management
Mr Agyapong said the commencement of the Eco levy was a major boost to the agencies quest to ensure effective management of e-waste.

He said part of the proceeds from the fund would be channelled into the building of the capacity of stakeholders in the waste management value chain, especially those in the informal sector.

The Chief Director of the Ministry of Environment, Science, Technology and Innovation (MESTI), Mrs Levina Owusu, said the implementation of the Eco levy was a big boost to the efforts being made by the government to effectively manage e-waste.

She said it would facilitate the building of the capacity of the informal sector players in the waste management value chain and help to stop the open burning of electronic waste.

Collaboration
For his part, Mr Odjidja said EWROTA would work with all actors in the e-waste sector and state agencies to sustainably manage waste.

“Recycling of e-waste should be a local thing so that the negative tag on Ghana as one of the hubs for electronic waste would be removed,” he said.