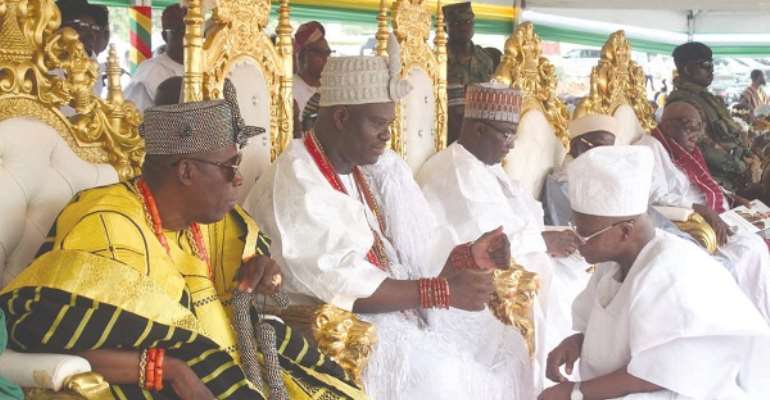 Vice-President, Dr Mahamudu Bawumia, has said under no circumstance should Ghanaians and Nigerians allow anyone to sow seeds of disunity between them.

He said the integration of cultures between Ghana and Nigeria must unite the peoples of the two countries, rather than divide them.

The personalities, comprising 30 males and 15 females, were conferred with Yoruba chieftain titles, including ‘Baba Adini’ and ‘Iyalode’, for their immense contributions to the growth and development of the Yoruba community in Ghana.

The exciting and colourful ceremony took place at the Forecourt of the State House last Sunday, and in attendance were high-ranking traditional rulers from the Yoruba Kingdom in Nigeria and some chiefs and queenmothers of the Ga Traditional Area, the Council of Zongo Chiefs and some government officials.

Nigerian delegation
The delegation from Nigeria was led by the Ooni of the Yoruba Kingdom of Ile-Ife, Oba Adeyeye Enitan Ogunwusi Ojaja II.

Other members of the delegation were the outgoing Nigerian High Commissioner to Ghana, Mr Olufemi Michael Abikoye; the Executive Governor of the Kwara State, Mallam Abdulrahman Abdulrasak; the Balogun of Yoruba in Ghana, Alhaji Dr Ahmed Vanderpuije, and other Yoruba leaders.

The personalities bestowed with chieftaincy titles, together with their families, were dressed in flowing Agbada and danced towards the Ooni as their names were mentioned to be presented with their titles.

Role of chieftaincy
Dr Bawumia underscored the important role chieftaincy played in the development of society.

“The state is very much embodied in our chiefs at the local level and if you look at the relationships among the different ethnic groups, you will notice that if our chiefs get along, our people also get along,” he said.

He traced the origins of the Ga people to Ile Ife in Nigeria and indicated that that was proof that the people of Ghana and Nigeria were one people with a common destiny.

“Today’s ceremony is a beautiful one. We are seeing how similar our respective cultures are. I am encouraged by the close bond between Ghana and Nigeria. We have our rivalries when it comes to soccer and jollof, but fundamentally we are one people,” he said.

Dr Bawumia mentioned a personal experience he had with a Nigerian and said: “I am here today for a Yoruba-Ghanaian who was my headmaster. He made me who I am today and I will forever owe him gratitude. Let us continue to keep together and help one another.”

Yoruba King impressed
The Ooni of the Yoruba Kingdom of Ile-Ife commended Ghana for being a beacon of hope for the African continent when it came to the practice of democracy and engendering peace.

He heaped praises on the government of Ghana for instituting the Year of Return, saying: “It has given Africans in the Diaspora a sense of belonging to the continent of Africa.

Africans in the Diaspora are now tracing their roots to the continent and we thank Ghana for leading the way.”

Oba Ojaja also thanked the leadership of the Ga Traditional Council for the cordial relations it had had with the Yoruba Kingdom over the years.

Ghanaian dignitaries
Among the Ghanaian dignitaries present at the ceremony were the National Chief Imam, Sheikh Osmanu Nuhu Sharubutu; the Nungua Mantse, King Odaifio Welentsi III; the Chief Executive Officer of the National Petroleum Authority, Mr Hassan Tampuli, and a three-time Journalist of the Year, Mr Abdul Razak El Alawa, who was the Chairman for the ceremony.

There was also a delegation from the Office of former President John Dramani Mahama, including the Third Vice-Chairman of the National Democratic Congress, Alhaji Said Sinare; the Second Vice-Chairperson, Ms Sherry Ayitey, and the MP for Odododiodoo, Nii Lante Vanderpuye.