No evidence of Sudan paramilitaries fighting in Libya: UN 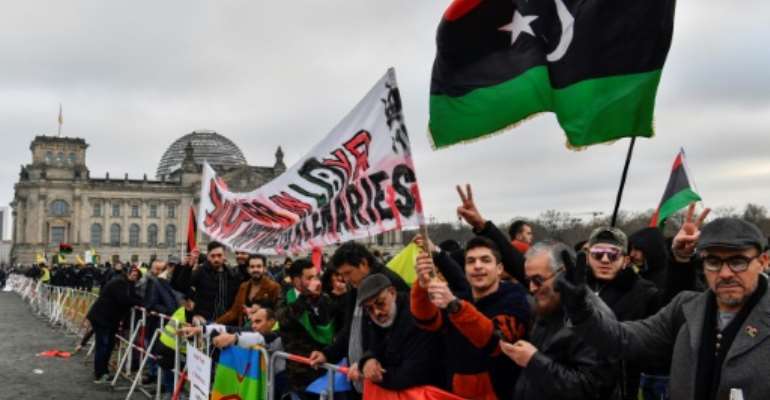 Protesters hold a banner reading "Stop war in Libya, Haftar and mercenaries" during a protest near the chancellery during the Peace summit on Libya at the Chancellery in Berlin on January 19, 2020. By John MACDOUGALL (AFP/File)

A United Nations panel said Monday it had no "credible evidence" of Sudanese paramilitaries fighting in conflict-wracked Libya for military strongman Khalifa Haftar as alleged by some media outlets.

Several Libyan and regional media outlets had claimed in recent months that hundreds of Sudanese paramilitaries from the Rapid Support Forces (RSF) were deployed in Libya to fight alongside Haftar's Libyan Arab Armed Forces.

But a UN panel of experts on Sudan dismissed these claims in a report released on Monday.

"The panel has no credible evidence of the presence of Rapid Support Forces in Libya," the report said.

It said there were, however, many Arabs from Sudan's conflict-wracked region of Darfur and neighbouring Chad fighting as "individual mercenaries" in Libya and they belonged to the same tribes that made up a majority of RSF personnel.

Libya has been mired in chaos since a 2011 NATO-backed uprising that killed longtime dictator Moamer Kadhafi, with the main cleavage nowadays pitting Haftar's LAAF against a UN recognised government in Tripoli.

The report said Darfur itself did not see any large-scale outbreak of violence during the reporting period -- March to December 2019 -- although the region saw intercommunal skirmishes, militia attacks on civilians and tensions in major camps housing people displaced by the conflict.

It said that a main rebel group in Darfur, the Sudan Liberation Army-Abdul Wahid group, has strengthened its military capability after its revenues increased following the discovery of a gold mine in an area it controls.

"The movement has been able to strengthen its military capability by acquiring new weapons and ammunition from local militias and engaging in a recruitment drive," the report said.

The group fought Sudanese government forces for years during the regime of Omar al-Bashir, who was deposed during street protests in April last year.

The conflict in Darfur erupted in 2003, when non-Arab rebels took up arms against Bashir's Arab-dominated regime, whom they accused of marginalising the region.

The conflict left at least 300,000 people dead and displaced 2.5 million others, the UN says.

The SLA-Abdul Wahid group has not participated in ongoing peace talks with Sudan's new transitional government which is negotiating with several other rebel groups in a bid to achieve a peace deal to end wars in Darfur as well as Blue Nile and South Kordofan states.

Bishop Dag apologises to Otumfuo over 'offensive' sermon
11 minutes ago

There's power in a father's encouragement – Pastor Otabil
11 minutes ago