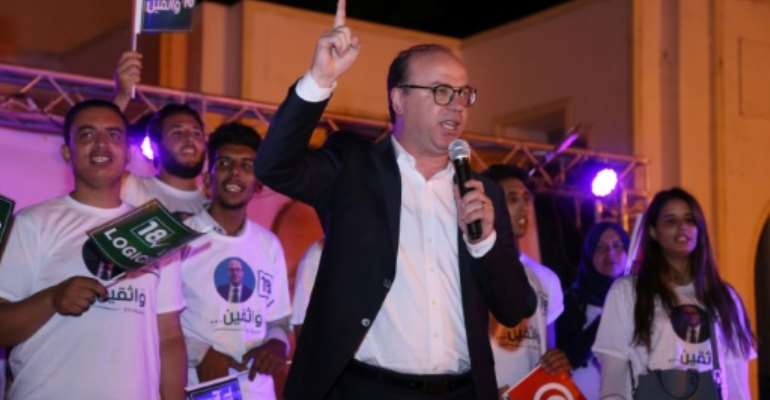 Elyes Fakhfakh has been named Tunisia's prime minister-designate and faces the difficult task of forming a cabinet agreeable to a divided parliament. By Anis MILI (AFP)

Former finance minister Elyes Fakhfakh was named prime minister-designate by Tunisia's president late Monday, and will now face the difficult task of forming a cabinet within a month.

Newly elected President Kais Saied "on Monday mandated Mr Elyes Fakhfakh with forming a government as soon as possible," the presidency said in a statement.

Fakhfakh's proposal will have to gain the approval of a divided parliament, which this month rejected an earlier attempt to form a government.

After months of negotiations that followed elections last October, parliament dismissed a cabinet list proposed under the leadership of the Islamist-inspired Ennahdha party.

If Fakhfakh fails to form a government, the next step would be dissolution of the assembly.

Fakhfakh, 47, was named minister of tourism in 2011 before serving as minister of finance from December 2012 until January 2014.

An engineer and manager trained in France, he returned to Tunisia in 2006 after several years working abroad.

He became involved in politics after Tunisia's 2011 revolution, joining the Ettakatol party, which had allied with Ennahdha.

Fakhfakh ran in the 2019 presidential election but only gained 0.34 percent of votes in the first round.

Tunisia is currently run by an outgoing government led by Prime Minister Youssef Chahed. Many positions are vacant pending the appointment of a new cabinet.

The candidate for prime minister initially designated by Ennahdha, Habib Jemli, proposed a cabinet of independents.

The country is struggling to meet the expectations of its population, while an assistance package started by the International Monetary Fund in 2016 ends in April.