Akufo Addo’s Parked Ambulances Could Have Saved Some Lives 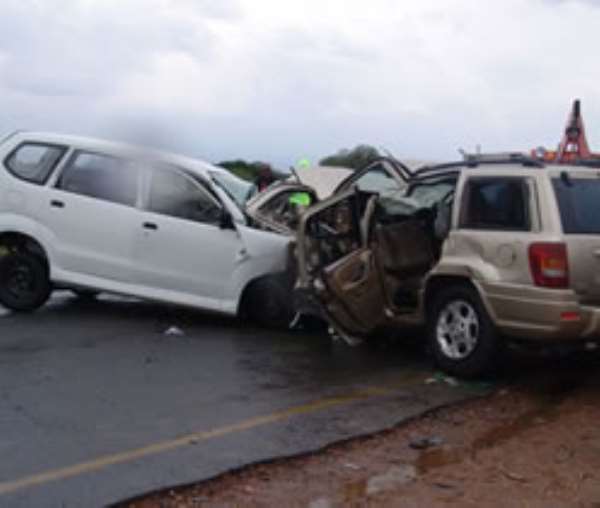 The UK and Ireland Chapter of the NDC has learned with a heavy heart the tragic accident that occurred at Komenda junction a few days ago resulting in 35 deaths and other passengers sustaining severe injuries.

Our deepest sympathies go to the family and loved ones of all those involved in the accident.

It was reported that many of the accident victims could have been saved if emergency medical services was promptly deployed to the scene of the accident.

Photos of the injured and the dead being carried to the hospital on the back of pickups and other vehicles are in the public domain.

We in the NDC UK and Ireland are appalled about the insensitivity and lack of respect for human life by the Akufo Addo government.

It is unbelievable that the Akufo Addo government choses to park ambulances bought with the tax payers' money instead of releasing them to save lives in critical situations like the Komenda junction accident and many more that occur daily across our country.

We wish to ask Akufo Addo to immediately accede to the request of the citizens who voted for him in 2016 but cannot afford to travel abroad to receive medical care or give birth like his appointees and release the ambulances now.

Human life is precious and irreplaceable. No amount of politics with the ambulances by his government can bring back the dead. Ordinary Ghanaians continue to loose their mothers, fathers, uncles, aunties, sons, daughter among others because of the absence of emergency medical services (ambulances) parked and waiting for the tax payers money to be spent in a needless ceremony to commission them as part of an election campaign strategy.

This is not only unacceptable but wicked. It is not surprising his minister for special initiatives told Ghanaians they were dying before the ambulances were brought into the country and should continue to die until government is ready to release the ambulances.

We call on President Akufo Addo to release the ambulances now and stop hiding behind the National Ambulance Service to tell Ghanaians cock and bull stories.

Mr Akufo Addo should be truthful and tell Ghanaians if the vans are not fully equipped ambulances as is being alleged. Is it the case that the Ambulances are awaiting the supplier to travel to Ghana to convert them into ambulances so that they can be fit for purpose?

Enough blood has been shed on our roads already?