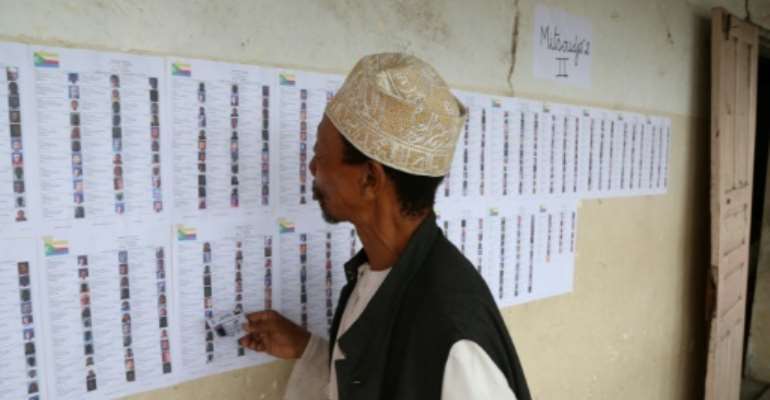 The Comoros president's CRC party won 17 out of 24 legislative seats after an opposition boycott. By Ibrahim YOUSSOUF (AFP)

Comoros President Azali Assoumani's party swept to victory in weekend parliamentary elections that were boycotted by the opposition, official results showed on Monday.

The Convention for the Renewal of the Comoros (CRC) won 17 out of 24 seats legislative seats, while two other seats went to parties in the presidential coalition.

A second round of voting will take place on February 23 to allocate the remaining five seats, the electoral commission said.

Opposition parties stayed away from the contest in the Indian Ocean islands' national assembly after failing to obtain guarantees of a "transparent, free and democratic" election.

Comoros has had a volatile political history since independence in 1975, enduring more than 20 attempted coups, four of which were successful.

Azali himself initially came to power in a coup, then ruled between 1999 and 2006. He was re-elected in 2016 in a vote marred by violence and allegations of irregularities.

In a statement the opposition described the weekend election as a "circus" and an "electoral masquerade", estimating a vote turnout of only about 10 percent, dismissing the electoral commission's declared estimate of 61.5 percent.

"Comorans have again displayed their final rejection of the dictatorship regime by deserting the polling stations," the parties said.

Azali oversaw a referendum in 2018 -- boycotted by the opposition -- that approved extending the presidential mandate from one five-year term to two.

The president has denied the allegations, and regretted the opposition's absence in the weekend vote.