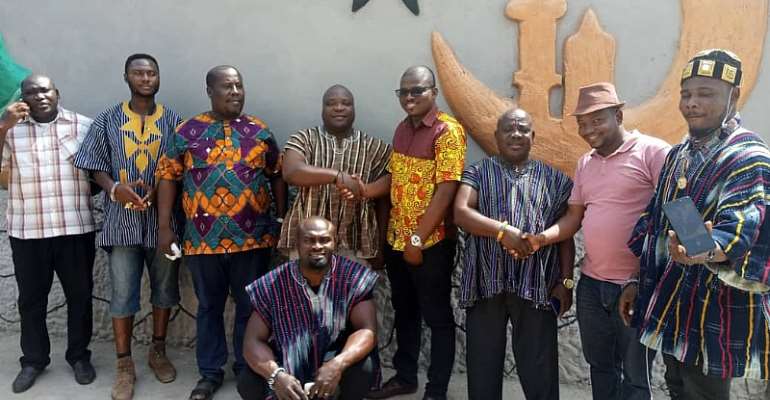 The National Democratic Congress (NDC) Parliamentary candidate for Anyaa- Sowutuom constituency in the Greater Accra Region, Mr. Emmanuel Allotey as part of his campaign tour has paid a courtesy call on chiefs and their elders in the constituency.

He was accompanied by his party Chairman Mr. Kwasi Arhin and constituency executives. The visit was to officially ask the chiefs who are the custodian of the land permission to campaign on their land and also, to seek their blessings as he blazes the campaign trail ahead of the December 7th 2020 presidential and parliamentary polls.

Mr. Allotey who is an renowned economist said they embark on such a tour to introduce himself to the constituents and ask for the blessing of the custodians of the land as he goes about his campaign to get elected as a Member of Parliament for Anyaa Sowutuom Constituency.

The PC said he represents the hope of the youth, women and all vulnerable groups in the constituency and will do his utmost best for the people.

According to Mr. Allotey, the constituency is deprived of basic social amenities and infrastructure for which reason he wants to be the MP in order to take development to the area.

Chairman Arhin as he is affectionately called assured the chiefs and elders that the party will embark on campaign of issues and peace to safeguard the peace of the nation and constituency.

"On behalf of the party, we'll embark on a peaceful campaign in your communities to protect peace and enhance our democracy as a nation. Ghana is a beacon of hope in Africa, so the NDC party would abide by the constitution that governs the nation" he said.

Chairman Arhin indicated that the election was not about war but an opportunity for political parties to sell their messages to the electorates.

Virtually all the chiefs and elders were amazed as this was the first time a parliamentary candidate and his party executives had called on them prior launching their campaign to officially ask for their blessing and support. The chiefs and their elders commended Mr. Allotey and the constituency executives for the initiative.

According to them, it showed a sign of respect, humility and his willingness to collaborate with the traditional authorities. They showered their blessings on the PC and his executives and in some instances poured libation for ancestral support.