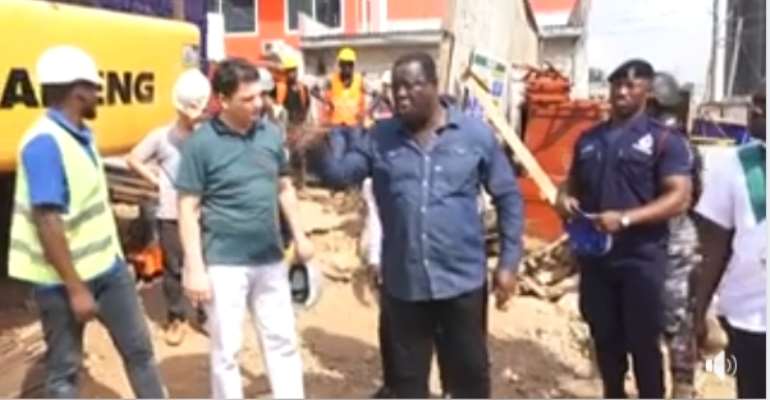 The Human Rights Division of the Accra High Court presided over by Justice Nicholas Mensah Abodakpi has issued a bench warrant for the immediate arrest of Samuel Hinson, the site manager of the Turkish Construction firm which is at the centre of the 22-storey building sited at the airport residential area.

Following an application for contempt against the Less Plus Company and its site Manager Mr. Hinson by the Association International School the court find that the accused and 2nd respondent in the matter has deliberately refused attending court.

In court on Monday when the case was called for hearing, lawyers of Kess Plus Company, (1st respondent) informed the court that their affidavit in opposition has not been served on the applicant’s.

He said he was going to follow that up and make sure the applicant is served with their affidavit in opposition.

But with the site manager, Hinson, 2nd respondent the court observed that after the posting of the order of substituted service, the 2nd respondent was deemed to have been served.

The court also added that the substituted service order was granted as far back as on December 5, 2019 and posted on December 20 which was to last for 14 days.

The court said that 14 days period has elapsed and the 2nd respondent is deemed to have been served with the processes.

A bench warrant is therefore granted for the arrest of Samuel Hinson, site manager of Kess Plus Construction Company, in the centre of the construction of the 22- story building in controversy.

This was after Belinda Pwamang, lawyer of Association International School made a request to the court for a court warrant to be issued for his arrest.

The court presided over by Justice Nicholas Abodakpi granted the application for his immediate arrest.

This follows the Minister of Roads and Highways, Mr Kwesi Amoako Atta, who embarked on a swoop at a construction site at the Airport Residential Area in Accra, and ordered the arrest of the contractor when, a 22-storey building being put up by a Turkish Contractor, KASS+F, is located at the Senchi Street, behind the Association International School was causing much Traffic and destroying the road network as well.

The minister who was very angry and furious for what was happening directed that the part of the project that took part of the road be pulled down, and that the contractors be surcharged for the reconstruction of that section of the road.

Mr Amoako Atta, who was accompanied on the exercise by some of the directors at the ministry, said the contractors would be processed for court and described their action as “unacceptable at the highest level”.

He said even though the government welcomed foreigners doing genuine work and business in the country, “We will not countenance anyone who takes the law into his or her own hands”.

Avoid greed, dishonesty and hypocrisy in galamsey fight – As...
25 minutes ago