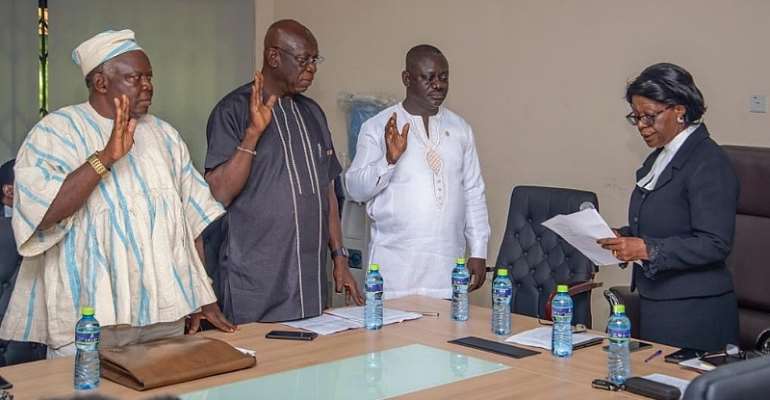 The executives being sworn into office by the retired judge

The Ghana National Association of Alternative Dispute Resolution (ADR) Practitioners has elected and sworn-in new executives into office at a ceremony held in Accra over the weekend.

Her Worship Johannah Abena Yankson (rtd) led the new executives to take the Oath of Secrecy and Allegiance.

Speaking after the ceremony, Mr. Owusu Koranteng, the newly elected President of GNAAP, underscored the need for dispute resolution mechanism to become the mainstay of the country's judicial administration.

He said those working in the ADR field were being driven by a strong desire to contribute to peace-building, using the broad spectrum of ADR tools for conflict resolution that guided them to build a strong ADR professional regulatory body.

He noted that the establishment of the Institute of Paralegal Training and Leadership Studies (IPLS) was part of the GNAAP objective of education, training and research in ADR, and it had supported the creation of well trained ADR professionals with different backgrounds such as chiefs, lawyers, members of Parliament, business executives, environmentalists and other professionals.

Mr. Koranteng gave an assurance that the new GNAAP executives would work to improve access to justice for most Ghanaians, as well as the promotion of peace-building.

The Patron of GNAAP, Alex Nartey, made it known that litigation is a threat to every human endeavour and must always be discouraged.

He further advised members of NAAP to rely on the ADR act of 2010(ACT 798) even though it has not been fully implemented as a guide to achieve a lot and meet the standard required globally.