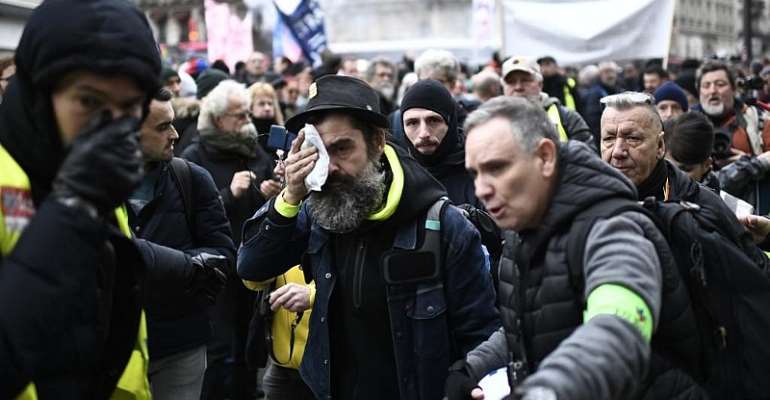 French prosecutors have opened an inquiry after a riot police officer was filmed punching a protestor who was on the ground at a demonstration on Saturday. A police union spokesman said the video has been taken out of context.

The footage, filmed during a yellow vest protest, shows a man with a bloodied head being held down on his back by a helmeted officer who strikes him hard in the face.

The police oversight body has been instructed to launch an investigation into "intentional violence by a person in a position of public authority.

Stanilslas Gaudon, of the police trade union Alliance told France Info radio station that the police decided to arrest the man because he kept attacking officers at the demonstration.

Gaudon says before the man could be handcuffed, the police realised he was bleeding from a head injury.

Gaudon said people should not rush to judgement until the IGPN, which investigates accusations against the police, has completed its work.

A number of recent videos showing what looks to be unjustified police violence at demonstrations have sparked outrage on social media.

President Macron warned last week that unacceptable behaviour of some officers threatened to undermine the "credibility and dignity" of the force.

However, he also condemned the violence of some extremist protestors, who have hurled paving stones and projectiles at security forces during demonstrations.

Police unions say their officers are under huge strain after a period of terrorist attacks, security operations, rising crime and more than a year of frequently violent demonstrations.