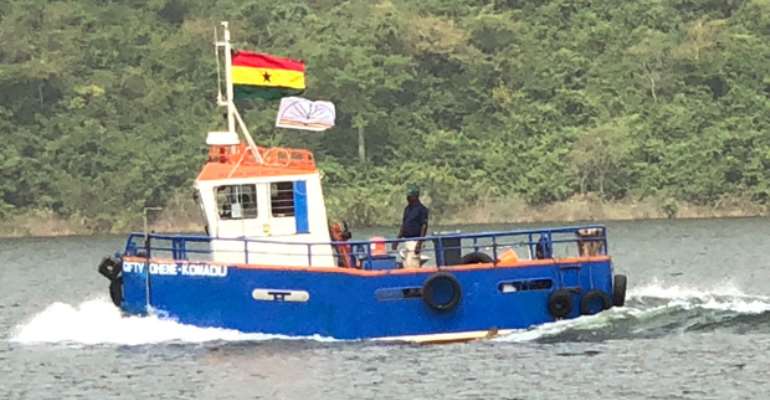 KKTR's Pushtug was to be named after President Akufo-Addo, whose brainchild, the 'One-District One-Factory (1D1F)' initiative, came to realisation. However, it was named after Gifty Ohene-Konadu, National Coordinator for the 1D1F Secretariat, because the Pushtug is female.

The Pushtug, among other services, will be used to move barge loads of log salvaged from under the Volta Lake which weighs up to 300 tons to KKTR's lakeside sawmill at Sedorm-Yiti in the Asuogyaman District of the Eastern Region.

The Chief Executive of KKTR, Mr. Elkin Pianim, said, “KKTR developing its own transport capacity is an important step in the evolution of our business, and it is only fitting that our first Pushtug be named after the President; however, it is female so management agreed to name it after the exemplary leader of the 1D1F Secretariat in recognition of the unstinting support 1D1F has provided KKTR to date.”

He said KKTR operates seven work vessels on Lake Volta in addition to MV Gifty Ohene-Konadu at its Sedorm port at various stages of readiness, all of which will be launched in the next six months as it continues to expand salvage operations.

Francis Mawuena Kalitsi, Chairman of KKTR, said, “Our expanding presence on Lake Volta is of positive significance to the larger lake community. For example, in times of emergency, the National Disaster Management Organization can call on our fleet as well to render assistance in a timely fashion as needed.”

Later Ms. Ohene Konadu said, “This Pushtug is dedicated to H.E the President for initiating the One District One Factory policy and making it a reality. On behalf of H.E the President, I wish to thank the management of KKTR for this honour. I strongly believe that this Pushtug will contribute immensely to the envisioned expansion of economic opportunity for all along the shores of Lake Volta and the country at large.”