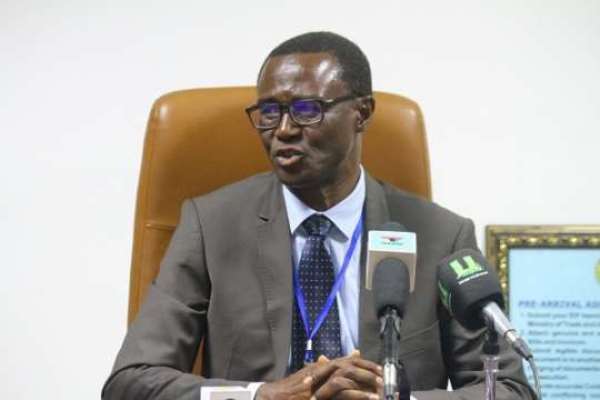 The Ghana Revenue Authority (GRA) says it has exceeded its revenue collection target for last year by 3.2 per cent, the first time in two years.

The acting Commissioner-General of the GRA, Mr Ammishaddai Owusu-Amoah, who disclosed the provisional figures to the Daily Graphic in an interview in Accra last Thursday, said the excellent performance by the authority was largely due to a number of measures rolled out during the year, adding that the feat would serve as a great impetus for achieving the target set for 2020.

This year, the government has set a domestic revenue mobilisation target of GH¢47.25 billion.

Excise duties also posted a significant performance, as last year’s collection saw a 10.32 per cent increase over the previous year’s.

As of July last year, the GRA was behind its target by about 11 per cent, which compelled the Minister of Finance, Mr Ken Ofori-Atta, to visit the Tema Port, in the company of one of his deputies, Mr Kwaku Kwarteng, to engage port users and encourage customs officials to step up their game.

Game changers
Mr Owusu-Amoah enumerated some of the measures taken to meet the target for the year to include reforms at the ports, which ensured the payment of the right duties by importers, enforcement of rules, intensive debt collection, distress actions, some of which heightened especially in the fourth quarter of last year, as well as the conduct of more issue-based audits.

He explained that the issue-based specialised audits, which covered the petroleum, telecommunications and mining sectors, financial services and other large companies, ensured that all revenue due the state was identified and collected.

“Secondly, we had to look at the petroleum sector and look at all possible avenues for leakages and do more audits. We took a number of petroleum companies and big corporations, for instance, and we did a lot of the issue-based audits,” he stated.

Issue-based audits came about when the GRA’s intelligence suggested that it could collect more, especially where there were possibilities of under-reporting.

Such audits, which were not as comprehensive as the full audits, narrowed the focus down to the areas thought to be performing below expectation, he added.

Supported by the Commissioner of Customs, Col K. Damoah, the acting Commissioner-General of the GRA explained that some reclassification of imports was done to ensure that items were not wrongly placed in certain categories to enjoy the benefits of the benchmark value reductions, to the detriment of the state.

He said the team of experts set up to ensure that the items were classified properly, for instance, removed excisable products such as cigarettes and alcoholic beverages from the benchmark items to ensure that they embraced the full incidence of excise duties.

Other new customs measures at the ports of entry included narrowing the discretionary powers to officers on the ground in taking decisions on the classification of items, he said.

He said the GRA also carried out more detailed examination of consignments, including post-clearance scrutiny of scanned cargo contents.

Although there was a 10 per cent target for intrusive examination of consignments – the act of opening and unstuffing containers to physically examine their contents – he said it did not exceed five per cent.

That was because the authority was mindful of balancing revenue collection with trade facilitation, as well as security issues, he explained.

Mr Owusu-Amoah explained that those measures ensured that revenue lost through the reduction in the benchmark rates were recouped from other sources.

Background
The government announced a reduction in benchmark values for determining duties by 50 per cent for general imports and 30 per cent home delivery value (HDV) for vehicles, effective April 5, 2019.

The action followed persistent calls by the trading public that they were paying high import duty rates at the ports.

While the 30 per cent discount for vehicles took immediate effect with the commencement of the policy, the 50 per cent announced for general imports, on the other hand, took some time to smoothen out due to the large number of the commodities involved.

Owing to the reduction in revenue, the government slightly revised the domestic revenue target downwards to GH¢42.08 billion from the initial GH¢45.56 billion.

Changes were also made in the leadership of the GRA at the beginning of last year.

Distress actions
Towards the end of the year, the GRA embarked on a “massive debt collection”, Mr Owusu-Amoah said.

The enforcement actions were not the preferred options of the GRA but the last resort, only after a lot of engagements and meetings had been held to encourage compliance, he added.

“However, we try not to shy away from using it if it must be used. This is when we have given a client all the chance for voluntary compliance and it fails,” he stressed.

He said after initiating the distress actions, the GRA got many companies and business owners voluntarily notifying it of their preparedness to honour their tax obligations, even if through special arrangements that enabled them to pay within a set time frame.

The tax law allows liable parties to honour their tax obligations within 12 months, with the approval of the commissioner-general.

Mr Owusu-Amoah dismissed complaints from some small businesses that the distress actions were impinging their businesses and bringing too heavy tax burdens on them, saying the smaller ones were allowed to pay flat rate tax stamps.

Performance challenge
The GRA also organised a performance competition among its 65 medium-tax and small-tax offices.

“We did a kind of a league table monthly, in which the offices could be first or last. This motivates staff to give of their best, as transfers, promotions and other benefits draw on this system,” he explained.

Bishop Dag apologises to Otumfuo over 'offensive' sermon
18 minutes ago

There's power in a father's encouragement – Pastor Otabil
18 minutes ago