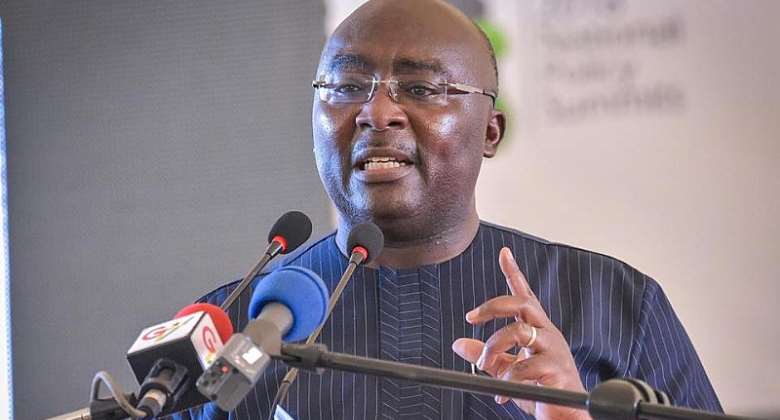 I wish to on this day pay a glowing tribute to the Almighty 25th March 2014 lecture delivered by the then economic messiah, HE Dr Mahmoud Bawumia at the instance of Prof Kwesi Yankah as chairman of the program.

This lecture was supposed to be the first of a series of Distinguished Speaker Series Lecture with Dr Bawumia as a visiting Professor to the Central University College. As a student of Economics then on the University of Ghana EPM program, I was forced to listened and read the paper although Dr Bawumia was a thorn in the flesh of the NDC then.

Dr Bawumia opened this lecture by admonishing the Ghanaian people that the lecture and for that matter the subject (Restoring the Value of the Cedi) should be seen and considered as one much of Economics than Politics. This actually caught many to listen even on their radio sets. Let it be on record that, this was captured as a reference paper to the many in his closet which made his PhD. Today in history, the many fine policy alternatives as were proposed and thrown about have been dusted in the shelves of libraries in Ghana and beyond.

It is said that the basic principles in economics are allergic to political propaganda as Dr Bawumia himself alluded to in his famous...”if the fundamentals are weak, the exchange rate will expose you”. So the substance of this lecture given the exigencies of the time in 2014 could pass some practical test although it was loaded with political propaganda and conveniences. The series contained issues of debt, Net International Reserves, Central Bank financing of government and many others.

Dr Bawumia just like Mr Martin Amidu, Manasseh Azure Awuni etc were strategically created monsters by the NPP and their media cabal to haunt the then regime under HE John Dramani Mahama. After losing out in 2008 when he first faced the people of Ghana in the political space with his raw and unrealistic economic theories, Dr Bawumia staged a come back in 2012. This time his impact was felt in the 9 long months stay in the Supreme Court where he served as the star witness in the box.

During his stay in the box, Dr Bawumia’s economic and political image got bruised with some allegations and concessions he made in the course or delivery and cross-examination. The Almighty Economic Messiah couldn’t make such a simple mistake of conceding that a blank space in a pink sheet means zero when he knows in basic mathematics that zero isn’t same as null (NB Zero is a number while null is nothing).

Dr Bawumia’s stay in the witness box gave him the best of ratings in the NPP and that earned him the star to play a permanent front role in the NPP’s 2016 campaign. So, he came into 2016 as a wounded economic lion with lots of bruises on his face; He came with two eyes closed and no direction. He was now bathed with organized and embellished propaganda and so economic fundamentals and principles made no sense to him.

Delivering the lecture on this special 25th day of March, 2014, Dr Bawumia alluded to the fact that Ghana as a fragile economy was operating on a floating exchange rate regime which unequivocally makes us susceptible to external shocks and economic decisions from giant economies like the USA. The case is even worse with our taste for imported basic commodities. But because he was given some political dose, Dr Bawumia refused to accept this explanation from the then government.

In his lecture, Dr Bawumia ridiculed every explanation the then government gave. For instance on page 40 of the said paper, He made useless of the explanation that the depreciation of the Cedi then was a global phenomenon for emerging markets like Malaysia, India, South Africa etc. With that explanation, the government at the time made the case that, the US Federal Reserve was engaged in what economist will refer to as “Tapering”...and this is the reduction in bond purchase and increase in US interest rates which will ultimately make US investments more attractive than the emerging markets. All these were rubbished on page 40 of his lecture when he said, once the fundamentals of the economy were weak, that explanation was weak, hollow, illogical and can’t stand the test of time. Today in history, Dr Bawumia attempted several times to justify the deprecation of the Cedi with same weak explanation but the law of Karma is at work.

On that 25th day of March, Dr completely run down HE John Mahama and his administration for ever engaging in borrowing. Although borrowing to put up the Gas Infrastructure In Atuabo was one of the best decisions any government could engage in. His assessment of public debt and his conclusions suggested that, Ghana had no reason to borrow and that borrowed cash were not used to engineer economic growth and development.

Dr Bawumia lamented over the GHC 40bn borrowed by the NDC in a five year period (2009-2014) and postulated that about 6,000 complete SHS projects could be built from this amount even if one was costed at a high amount of GHC 6m. He again said, about 15,000km roads could be asphalted with this amount and thousands of boreholes drilled across the hamlets of Ghana. Today, if we were to play back the logic and reasoning of Dr Bawumia as against borrowing, how justified with it be to have his government borrowing as much as over GHC 80bn and still counting? What have they used the money for? The last time I checked, most of the projects running had their funding secured by the John Mahama administration and was left with disbursements and the physical project execution. By 2016, the $84m for the Pokuase interchange project was secured and added to the stock of public debt owed to the NDC and John Mahama’s administration.

It is unarguably ironical for Dr Bawumia to assume that the following were signs to show that an economy such as Ghana’s in 2014 had weak fundamentals but same can’t be used as a standard measure under him as the chairman of the Economic Management Team:

4. Declining consumer and investor confidence in the economy...among others.

The above were part of a long list of economic cases used as a measure of an economy in crisis. Restricting us to the above four only, can Dr Bawumia’s economy today pass the test? What is the state of our Net International Reserves? What about borrowing and debt levels?

At the time of this lecture, $1 was exchanging for GHC 2.6 and the reasons given then were untenable and unforgivable according to Dr Bawumia. Today, same $1 is exchanging for between GHC 5.64 and GHC 5.72 depending on the market one is operating. What is the explanation from Dr Bawumia? Now, that International shocks and economic decisions can’t fit for purpose in the scenario of Ghana’s depreciating cedi, what else is the cause?

In his lecture, Dr Bawumia proffered 9 alternative solutions to restoring the value of the cedi. On page 44, solution 1, Dr Bawumia suggested in part...the government has to admit that the economy is in crisis so to carry the country along and get public support for the tough remedial measures it may have to take. The problem will not go away by refusing to acknowledge it. He said, there must be policy credibility to assure markets and investors that Ghana is a safe bet. Today, is Dr Bawumia able to swallow his pride and stop blaming HE John Mahama and accept the problem the economy is facing?

Solution 2 on page 45, Dr Bawumia suggested to the Mahama government on paragraph “d” to deal effectively with corruption in the management of public finances. What has happened to this idea? Has he heard about the 400 NDA tricycles worth GHC 2m that his darling Samba allegedly carried away on the blindside of the Authority? What about the endless opened looting of the public purse right by him?

Those times when the lectures of Dr Bawumia were replayed and serialized on popular morning shows have since diminished. The voices of popular show hosts which repeated jabs of Dr Bawumia and made them to look more of better alternatives to the construction of Terminal 3 and the Eastern Corridor Road by HE John Mahama have become voices of hymns. Dr Bawumia described HE John Mahama as incompetent on the back of the depreciating cedi, how should we describe him and his boss HE Nana Addo after we were told the Dollar was arrested and the keys handed to the IGP?

May the soul of HE Amissah Arthur Rest In Peace. He told Dr Bawumia that the economy can’t be managed with book knowledge and unrealistic theories. Today, the 170 questions are haunting Dr Bawumia himself. He’s been asked to answer just 1 of the 170 on how to restore the value of the Cedi and He is no where close to the Ali Baba and the “40 thieves”. It is now clear that to manage an economy is not about PhD but the application of common sense, logic and realism. HE Aliu Mahama wasn’t a PhD holder, Mr Mahama wasn’t one neither was HE Amissah Arthur, but none of them beat their chest like Dr Bawumia did.

So, I still don’t understand why the Agric Minister is in the list while Dr Bawumia is resting in the IT rooms of the NIA.