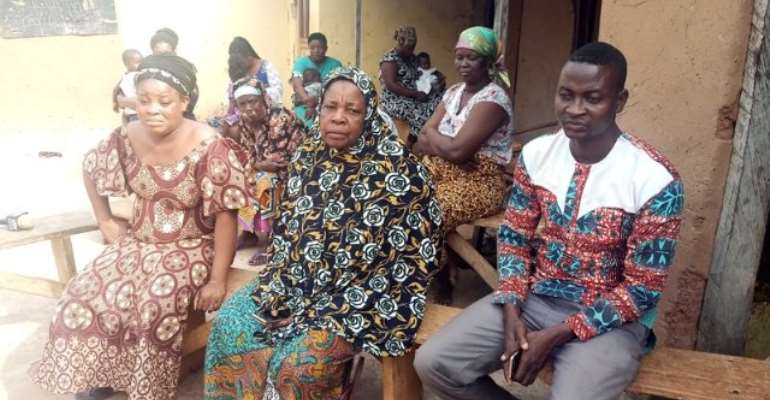 Some of the family members of 35-year-old Aremeyaw Nasigri who spoke to Joy News.

Residents of all six districts in the North East Region are pleading for police protection against what they say is the increasing spate of ruthless robbery attacks by unknown gunmen in the area.

They say the armed robbery attacks are causing violence and chaos in their communities.

Across all the six districts, the residents are calling for a more effective police presence and enhanced security.

The calls have intensified following the killing of two persons two weeks ago at separate locations in the Yunyoo district and East Mamprusi municipality.

Apart from the fresh reports of deadly onslaughts on traders and road users, security services are recording several killings resulting from armed violence and insecurity.

The two incidents which occurred in Gbintri and Nasuan communities have renewed fears and sparked demands for the police to do more to protect lives and properties.

However, inadequate staff, lack of logistics and bad road networks continue to be the top challenges militating against police efforts to fight crime in the region.

The Interior Minister, Ambrose Dery, is expected to travel to the region on Monday to, among other things, assess the security situation and commission a new batch of police officers for the area.

The lack of a strong security presence in the North East Region seems to make it a conducive and convenient hideout for crime suspects in the country.

The horrendous story of a notorious criminal, Johnson Kombian, and the endless cycle of gun violence and other forms of criminal activities appear to give befitting credence.

Years of underdevelopment and lack of progress occasioned by prolonged communal disputes on multiple fronts have denied the people their rights to accessing certain basic public services that guarantee peace, stability and prosperity.

There are still district capitals in the region that do not have permanent police posts.

Since 2017, robbery attacks and violent crimes have surged to unprecedented levels in all parts of the region as a result of several reasons including high unemployment, illegal mining and smuggling.

On the night of Wednesday, January 1, the first attack by the gunmen ushered in the new year.

It was about 9 pm at Gbintri and the target was a 35-year-old Aremeyaw Nasigri, the secretary of the town's chief.

At a drinking spot where the victim was having drinks with friends, a lone masked gunman arrived on a motorcycle and opened fire on him.

Mother of the deceased, Hajia Rebecca Dongi, said: "I was at Nalerigu when they called to inform me that Aremeyaw had been killed at a beer bar. One of the witnesses told us the one who killed him was wearing jeans top and down."

She urged the police to expedite investigations into the attacks by immediately arresting the bar owner and other individuals who were present at the time of the incident.

"The attacker shot him and followed up with more shots when he ran into the main compound of the house. Why did the bar operator lock all doors in the house? The bar operator should be picked by now. He knows the one who killed Aremeyaw, but the police are not acting,” she added.

It was a gripping outpouring of sorrow at the family house of the deceased, who left behind a wife and three children.

The wife, Laadi Aremeyaw, was emotionally and physically distressed as she speaks to Joy News. She also demanded urgent justice for her murdered husband.

"I feel completely broken right now", she said. “I cannot sleep, those who killed him did so out of hatred. I want them to be arrested and dealt with".

It was the same mood and feeling for other family relatives gathered for this exclusive interview, including this 60-year-old woman, Mma Fatima Imoro.

Some of the family feel the police are not doing enough to identify, arrest and prosecute the attackers.

Asana Nasigri, an elder sister of the deceased said the police are not acting on the matter and the family may be compelled to exact justice in their own way.

A seven-year-old daughter of the deceased, Abiba Aremeyaw, also joined the calls for speedy investigations into the killing of her father.

Sunday Nasigri, a brother of the deceased also repeated the accusations of police inaction.

He said the family was disappointed that the police were yet to arrest a single suspect despite a petition for the case to be fast-tracked.

A week later, three gunmen also attacked a fuel station at Nasuan near Yunyoo and killed a watchman after a short gunfight.

The police service has come under growing pressure to deal with these rampaging gunmen and other security threats including the increasing violent disputes between native farmers and nomadic herders and the smuggling of drugs and arms through local communities.

But with limited staff and inadequate logistics, the police seem unprepared and helpless.