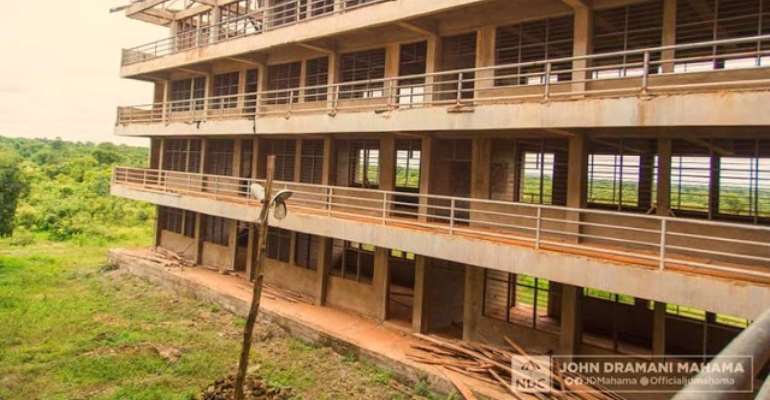 If Akufo Addo really wants to be recognized as a good or intelligent Ghanaian president, that really cares about the suffering of common Ghanaians, then he must quickly apologize to Ghanaians and takeover the uncompleted projects left by the former government of the National Democratic Congress. If not, anyone who votes for this man is not really an intelligent person. Find out and you will know.

In 2016, NDC was defeated by the NPP party under the current leader, Nana Akufo Addo and before leaving office, the ex-Ghanaian leader, John Mahama left many projects uncompleted.

Some of the abandoned projects include:

These projects, for God's sake, are the property of Ghana or for Ghanaians, toward economic and political developments in the country. Therefore, it doesn't make sense for a new political party in power to abandon such projects.

Politics in Africa is taken as a joke by the developed world, while African leaders are never given the recognition they deserve because of the lack of efficiency and their corrupt nature.

There are brilliant people in Ghana, unfortunately only a few people have spoken about this political blunder Nana Akufo Addo made, without taking its impact on the economy of Ghana into consideration.

All that Ghanaians are interested in or saying is the NPP will win, however, they forget that once a bad leader in four years, these same bad leadership will be in the next four years.

It seems most Ghanaians have lost their thinking ability to realize how Akufo Addo’s administration has made Ghana lost millions of dollars, due to the abandoned projects, poor planning, overestimation of the cost of projects and corruption.

Like always, the common Ghanaians are those that feel the impact of the poor administration and ineffective leadership. Politicians know where they get their extra income, therefore, they don't feel that pain or the economic burden.

Make any political research and find out which new government neglected projects of the former government to be a waste, you’ll never find it anywhere, unless Ghana because of the lack of intelligence, yet Ghanaians think Akufo Addo is the most intelligent leader because of implementing a free education.

Implementing a free education doesn’t make one intelligent but the quality of leadership a president offers to the citizen is what matters.

These are what European leaders and the presidents of the United States of America in the past and today, provide for their citizens. They don’t abandon projects left behind by the Democrats or the Republicans.

Akufo Addo what you did makes you a very bad leader indeed and doesn’t even permit you to be a minister let alone a president. However, I know that you may win the 2020 elections because many Ghanaians have lost their thinking ability, due to the impact of frustration under NDC.

But before you win or lose the elections, apologize to Ghanaians and take over the uncompleted projects because they are for Ghanaians, not for the NDC.

Eliminate hate, jealousy, tribalism, and nepotism from your government because they are diseases that affect the growth of every country. If Ghanaians are really intelligent as I know, this is the question they must find an answer:

If in the first four years, Akufo Addo neglects projects left by the NDC government, which belongs to Ghanaians, so if he wins the 2020 elections, what's he going to do with those projects, just to be a waste?

Ghanaians asleep must wake from their slumber and cast their precious votes wisely in 2020. The hypocrisy of Akufo Addo will come back to haunt him.

All the NPP politicians are stinking hypocrites, time will tell, that I just don't write meaningless articles but true facts.