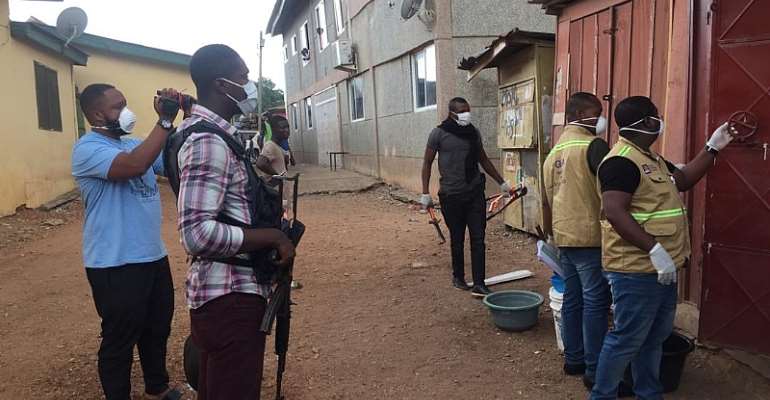 The Ghana Standards Authority (GSA) and personnel of the Ghana Police Service have raided some individuals producing unapproved pesticides, insecticides and household chemicals at South Odorkor, a suburb of Accra.

The raid became necessary following reports from residents that the operations of the individuals in question were posing health challenges.

During the Sunday morning raid, it was discovered that the manufacturers of the products including Magic Insecticide Powder, were using a fake GSA Certification mark.

The raid led to arrest of four men including one Isaac Atta-Baah and the immediate closure of the facilities involved in the illegal manufacturing.

The suspects are believed to be part of those in the illegal trade and he told the media the Magic Insecticide Powder for instance, is sold for GH¢ 2 per pack and GH¢ 5 for three packs.

Most of the facilities were wooden makeshifts situated within the heart of residential enclaves where scores of children live.

Some of the manufacturing centers are located near the palace of Odorkor Chief.

Leading the raid were technical staff of GSA and its Executive Director, Prof. Alex Dodoo.

Prof. Dodoo said the operations of the manufacturers were posing serious danger to residents, nothing that there was the need for serious action in dealing with others engaged in such activities.

He said the chemicals are harmful and that residents of Odorkor are at risks of cancers and respiratory diseases.

GSA is the government agency responsible for developing, publishing and promoting standards.