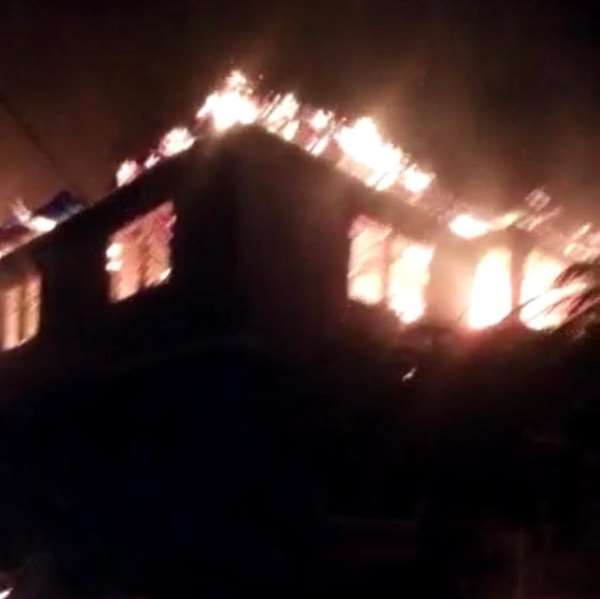 A 12-bedroom building at Obuasi Amangoase in the Ashanti region has been gutted by fire, Sunday.

Adom News’, Isaac K. Normanyo reports that none of the residents was able to salvage any property from the fire.

One of the victims, Daniyalu Mohammed who has returned from overseas the previous day lost his passport, $5,000 and other valuable items in the inferno.

Another victim, Fadila Mohammed, recounted that they were prompted to wake up by some mourners who shouted that the building was ablaze.

In took a while to douse the fire as the Obuasi office of the Ghana National Fire Service said their fire tender was not in good condition. A collaborative effort by AngloGold Ashanti (AGA) and Fomena Fire Service helped to put out the fire.

Bismark Akowuah, the Obuasi Municipal Director of the National Disaster Management Organisation (NADMO) said he received a call to action at about 1 am. According to him, he immediately called the Fire Service to get the scene and save the situation.

“As at now, we have not ascertained the cause of the fire," he said.

Superintendent Frank Adusah, Head Of Emergency Management Services (EMS) of AGA Obuasi Mine said access to the house was a major challenge in dousing out the fire.

He believes but for that challenge, the rooms won’t have been that burnt and some of the residents would have been able to salvage some of their properties.

Supt Adusah appealed to government to help repair the Obuasi Fire Service tank since the chances of fire outbreaks are high in the dry season.

He also advised the public to ensure their buildings do not obstruct pathways of vehicles as this could spell disaster in causes of emergency.