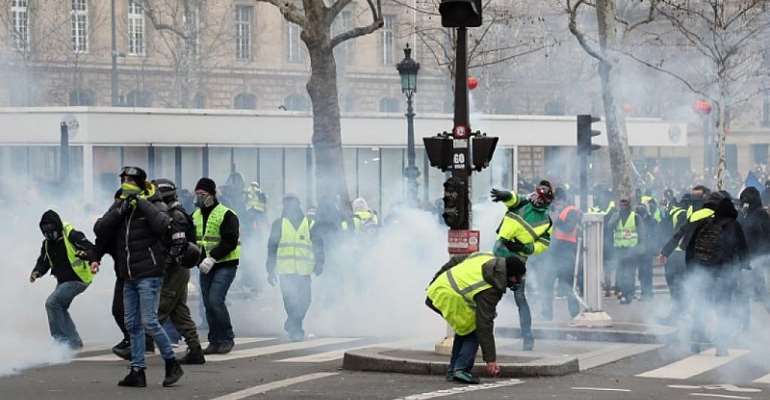 French prosecutors have opened an inquiry after a riot police officer was filmed punching a detained protester at a demonstration in Paris. The move comes after several alleged incidents of police brutality against pension reform protesters and Yellow Vest anti-government demonstrators.

In the incident filmed during a Yellow Vest protest on 18 January, a man with a bloodied head is seen being held down on his back by a helmeted officer, who then strikes him hard in the face.

The Paris prosecutors' office said it ordered the police oversight body to launch an investigation into "intentional violence by a person in a position of public authority".

Another video of the incident, filmed near the Gare de l'Est train station by the television channel of the French AFP news agency, shows the man screaming in pain on his stomach as the officer pins down his elbow with his knee.

"The police chief has asked the department of public order to give a full account of this incident," the Paris police department said.

The protests were the latest of the weekly Saturday demonstrations held by Yellow Vest demonstrators since November 2018, and which have been boosted by opponents of a planned pensions overhaul.

President Emmanuel Macron warned last week that the "unacceptable behaviour" of some police officers risked undermining the "credibility and dignity" of the force.

But he also denounced the violence of some extremist protesters who have hurled paving stones and other projectiles at security forces during protests, while smashing storefronts and bus stops or burning vehicles and rubbish bins.

Paris bistrot blaze under investigation
Prosecutors have also opened an inquiry after a posh brasserie favoured by President Macron was targeted in what is being treated as an arson attack before dawn on Saturday.

Firefighters quickly put out the blaze and traces of combustible fuel were later found on the establishment's heavily damaged terrace -- where Macron hosted a lavish party just after winning the first round of the 2017 presidential vote.

Bigotry against Muslim students won't be tolerated – Muntaka...
23 minutes ago