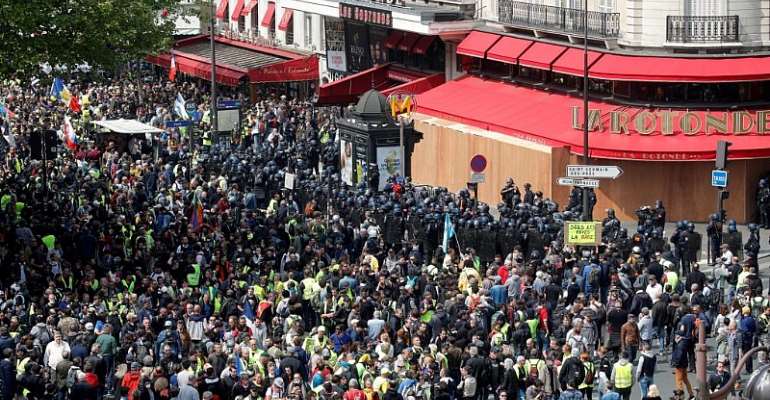 The police In have opened an investigation after a fire started in the early hours of Saturday morning in a famous Parisian brasserie prized by President Emmanuel Macron.

Around 5 a.m , an alarm went off in the brasserie "La Rotonde", in the Montparnasse district of Paris in the south of the city.

When they arrived, the police discovered that a fire had started on the closed terrace. The fire was quickly contained, said the prefecture of police.

Emmanuel Macron had organized a dinner in this brasserie with his supporters and friends to celebrate his qualification for the second round of the presidential election in 2017.

An investigation was opened to determine the causes of the fire.

"The inquiries are focused on a deliberate act" according to police

The laboratory of the prefecture found traces of oil at the scene, according to judicial sources and close to the investigation.

A previous fire attempt had failed on January 9 outside the establishment.

The right-wing candidate in the March municipal elections in Paris, Rachida Dati, said that she was "concerned about the escalation and the radicality of the violence that is spreading across the country”.

Friday evening, dozens of opponents of Emmanuel Macron had gathered in front of the Parisian Bouffes du Nord theatre, where he spent the evening trying to force entry, before being repulsed by the police.

"What happened in #BouffesduNord is unacceptable, unacceptable. When we try to attack the President of the Republic, we try to reach the institution," the deputy and spokesman for party in power, LREM, Célia de Lavergne, tweeted.

An opponent of President Macron, Taha Bouhafs, was taken into police custody Friday after the demonstration in front of the theater, was presented to a judge on Saturday evening.