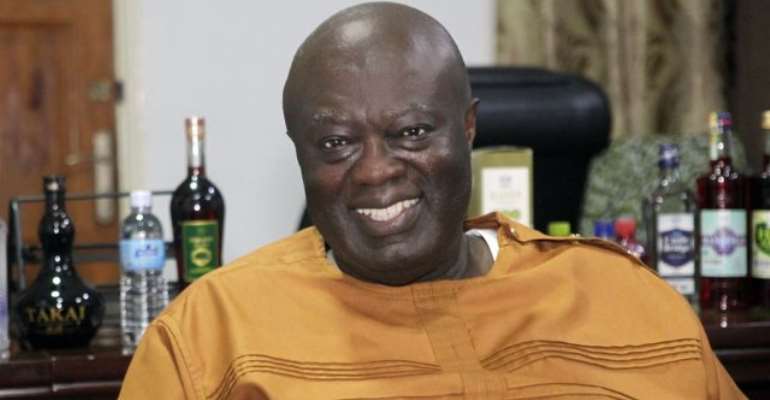 One of the best-performing state-owned companies ever since the NPP assumed power in 2017 is GIHOC Distilleries Company Limited.

GIHOC has undoubtedly seen a dramatic revamp under the able management of Mr. Maxwell Kofi Jumah.

Mr. Kofi Jumah has shared the intriguing story behind the turn-around.

He has revealed that his decision to assume leadership of the company in 2017 was informed by a challenge to him by President Akufo-Addo.

Kofi Jumah explained that giving the President eager to see a facelift in organising, marketing and distribution of products of a company which was on its knees.

Three years into his administration, fortunes have improved as the company’s production level has shot up to about 400%.

He says many more people have been engaged, with better remuneration for workers.

“Even cleaners are getting better payment", Mr. Jumah stressed.

Mr Jumah further explained the company's staff have worked extra hard to create a reputable brand across the regions.

He says the company which used to be known only in the capital is now visible even in places like Sefwi Wioso.

The GIHOC Distilleries CEO has no regret taking over the almost defunct company at the time relatives had their own reservations.

According to Mr Jumah, his family was opposed to his appointment he “insisted on taking up the mantle because he wanted to make a difference.”

For him, the challenge by the President has not only given him the resolve to prove he was up to the task but also showed him the way to lead.

The former boss of Kumasi Metropolitan Assembly (KMA) reveals the culture of dismissal staff after a change of government was not part of his plans when he assumed office.

"I wanted to work with effective and efficient workers so I assured all the workers, and that formula worked,’’ Mr Jumah pointed out.

Through initiatives to empower hard-working staff, those who were nearing retirement were made distributors of the company keep them afloat for the rest of their days in retirement.

Some of the staff, according to Mr. Jumah, are also distributors to promote the company's products and build additional income for themselves.

GIHOC now has offices in other parts of Africa, including Liberia, Cote d’Ivoire.

In February this year, the company will establish another office in South Africa while plans are underway to establish other branches in the USA and China.

"These achievements should not be our first and last," he emphasizes, encouraging his workers, especially women, to continue to exhibit professionalism in their dealings at GIHOC.

Mr. Jumah also touched the reason for which company is not producing its beverages in plastic but rather in bottles.

Mr. Jumah commended the brains behind the establishment of GIHOC Distilleries adding his outfit would not let them down.