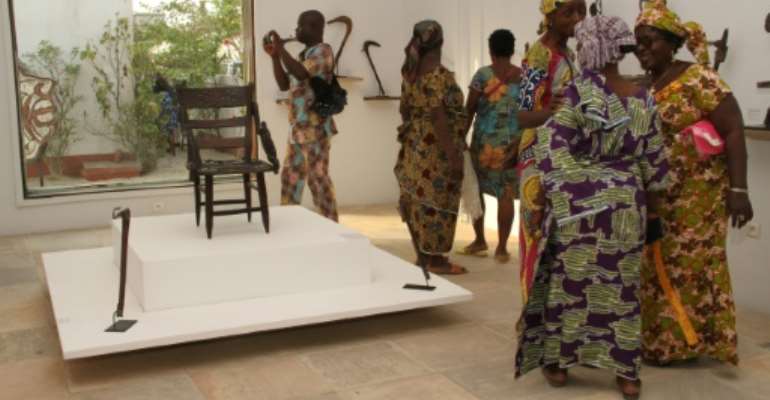 Ambassadors from France and Japan mingled with presidential officials, royalty and schoolchildren as Benin celebrated the return of dozens of colonial-era antique artefacts looted by France more than a century ago.

Guests clustered around a magnificent 19th-century sword decorated with animal figurines once wielded by one of the Amazons, the female warriors who served as royal bodyguards. Other items include royal sceptres in the shape of an axe or a crosier.

But while France has agreed in recent years to return some of Benin's looted treasures, this collection came home thanks to a private initiative.

Earlier this year, the Collective of Saint-Germain-des-Pres Antiquarians, a group of specialists based near Paris, managed to acquire them -- with the specific aim of sending them back home to Benin.

The exhibition of 28 objects is based at the Petit Musee de la Recade, a small museum on the outskirts of the capital Cotonou. 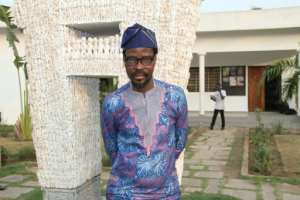 Dominique Zinkpe, a Beninese contemporary artist and director of Cotonou's Centre for arts and culture, poses outside the Petit Musee de la Recade, hosting the arefacts returned from France. By Prosper Dagnitche (AFP)

The works of art were previously displayed at Paris' Quai Branly museum, home to tens of thousands of pieces of African art.

Looted from what in the late 19th century was the Kingdom of Dahomey before it became a French protectorate from 1894, until recently they belonged to private collections.

When the Petit Musee de la Recade opened in December 2015, it had 37 spectres and six other artefacts donated by the antiquarian group and private collectors -- so these new acquisitions represent a significant boost to the collection.

"We have 28 new items in our collection," said Marion Hamard, director general of the centre for the arts and culture housed within the museum.

"Among them we have two sculptures, eight swords, 16 sceptres and two daggers."

"This will allow us to expand our collection considerably," she added.

She hoped the new acquisitions would help boost visitors to the museum -- mainly schoolchildren and locals -- from 7,000 to 10,000 by the end of the year.

The politics of restitution

The French antiquarians who got hold of the artefacts, bought them last March at auction, paying several thousand euros (dollars) a piece in order to have them transferred back to their homeland. 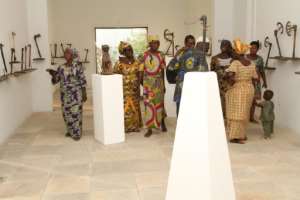 A group of French antiquarians acquired the artefacts, including decorative royal sceptres, last March at an auction after France initially acquired them 130 years ago during a military expedition to what was then the Kingdom of Dahomey. By Prosper Dagnitche (AFP/File)

They came from two private European collections -- one handed down by Alfred Testard de Marans, who took part in a military expedition to Dahomey in 1890; the other that of Father Le Gardinier, a priest who was part of the same mission.

"These are two historic collections," said Bernard Dulon, a member of the antiquaries group behind the project.

"These items, collected in the 19th century, hark back to Benin's very rich past. They bear witness to an upstanding, combative, resistant Africa."

But a report commissioned by the French presidency two years ago concluded that items looted during the colonial era should be returned to their countries of origin.

In 2018, France pledged to return 26 statuettes from the kingdom of Abomey from the Quai Branly-Jacques Chirac museum.

It signed an accord with Benin on joint exhibitions, museum loans and technical assistance for works of art, and the artefacts should be back in Benin by 2021.

Some French museums have however voiced concern on what they see as the politicisation of art restitution. They question whether cultural institutions in some African states have the infrastructure to house them.

The accord provides chiefly for loaning works to Africa rather than permanent restitution, unless, as is the case of the Abomey statuettes, they were obtained through fragrant military pillage.

The Kingdom of Dahomey -- in what would become modern-day Benin -- reached its peak in the 18th and 19th centuries and became a major source of slaves for European traders before conquest by Paris ended its rule.