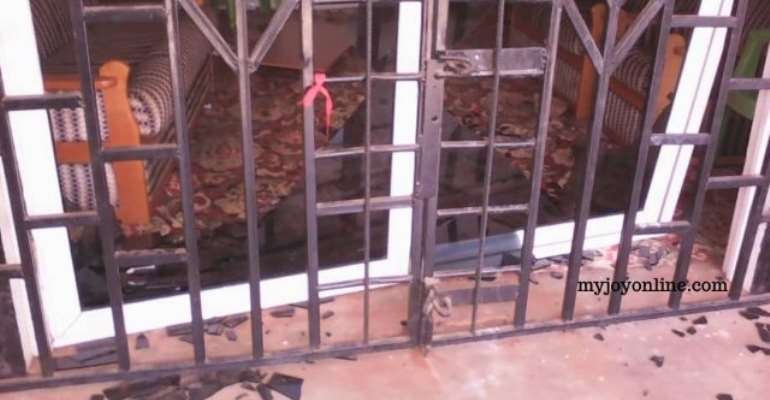 The balloting of positions for NDC party parliamentary aspirants have turned violent at the Yilo Krobo constituency office of the party in Somanya in the Eastern region.

Some angry members of the NDC have vandalised the party's office

They destroyed the glass door at the entrance of the office, some equipment, documents as well as other things in the office.

Joy News' Kofi Siaw has reported that the processes leading to the selection of a candidate to lead the party in the constituency have been characterised with a lot of controversies.

The primaries in the area had been put on hold following a petition by a branch chairman to the top hierarchy of the party to disqualify one of the aspirants, Albert Nyarkotey, who is a procurement and energy expert.

But the party's general secretary, Johnson Asiedu Nketia, after meetings with some other party executives cleared the aspirant.

He authorised the constituency to conduct the balloting which precedes the primaries scheduled for February 8.

The constituency chairman, who is reported to have openly kicked against Mr Nyarkotey's candidature is alleged to be the mastermind behind Saturday's protest.

Narh Agbo, the NDC chairman there told journalists that he was on his farm when he was informed about the violent attack on the party's office.

He says he has reported the matter to the General secretary for immediate action to be taken.

Meanwhile, police in Somanya have visited the scene and have launched investigations into the matter.