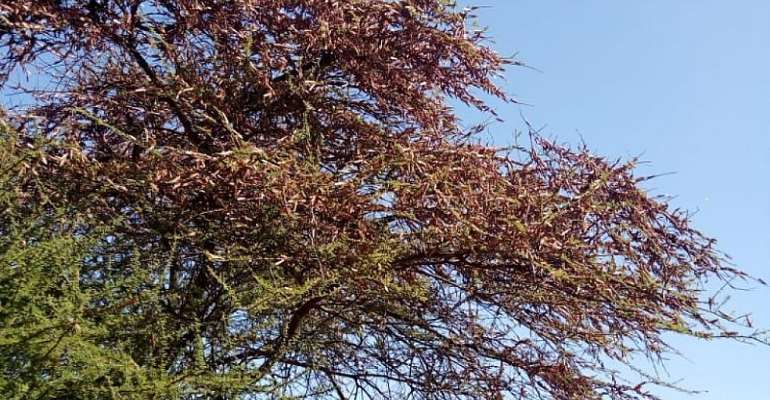 A locust invasion originating in the Arabian Peninsula continues to spread across East Africa in one of the worst outbreaks in 25 years.

In a throwback to the biblical plague of locusts which God inflicted on the Pharaohs of Egypt, the Horn of Africa is once again experiencing an invasion that is wreaking havoc on food security in the region.

“They will pose a threat to the pasture areas and of course, pastures affect livelihoods of herders…and then of course to subsistence crops, the rain-fed crops as well as some of the cash crops on the Horn of Africa," says Keith Cressman, the Senior Locust Forecasting Officer at the Food and Agriculture Organization of the United Nations.

The locusts in this situation are referred to as desert locusts.

“There's a number of different species of locusts but this is the oldest and the most dangerous of all,” stresses Cressman.

Origin of current invasion
Heavy rains and cyclones triggered a recent surge in desert locust populations according to the FAO website.

The current invasion dates back to 2018 after several storms “that developed in the Indian Ocean and brought heavy rains to the Arabian Peninsula,” explains Cressman.

Unusual weather conditions linked to long-term climate change are thought to be the sources of these storms.

The locust swarms formed in what Cressman terms an “empty quarter”: the interior of Saudi Arabia where there are no roads and it is completely inaccessible. “So the initial breeding was never detected,” and so now steps were taken to stamp the swarms out.

Given that the ideal conditions for locusts are “moist, sandy soil, and green natural vegetation,” after several generations of breeding they began to swarm and eventually made their way to the Horn of Africa via Yemen.

Fast producers and movers
To better understand this, after six months, one has 500 times the number of locusts.

The swarm then moved in two directions: one to southern Iran and one to Yemen.

Iran was unable to stop it as it doesn't have access to the right pesticides under current sanctions, and with the on-going civil war in Yemen; no one was able to organise an operation to stop the insects.

By July 2019, the swarms had “migrated to Somalia and Eastern Ethiopia,” says Mehari Tesfayohannes, the chief information and forecasting officer for the Locust Control Organization for Eastern Africa based in Nairobi, Kenya.

Due to the security situation in Somalia, the locusts were not stopped and so they've now made their way into Eritrea, Sudan and Kenya, the latter being the worst affected according to Tesfayohannes.

Operation to stop locusts
Kenya, says Cressman, is not a country that often faces desert locusts.

“We have got a report of a locust swarm the size of 50 kilometres by 40 kilometres…that is almost 2000 square kilometres," says Tesfayohannes.

Initially, when the locusts arrived in Kenya and Somalia, there were reports that armed soldiers tried firing at them.

“Of course that doesn't kill any of the insects and can be quite dangerous for other reasons,” notes Cressman.

With swarms this large and moving this fast, the only way to stop them is through ground and aerial operations spraying pesticides.

Of course, locusts have natural predators, such as certain parasites, certain types of birds, lizards, snakes and foxes explains Tesfayohannes.

But current operations are not in a position to release such animals, as they cannot control an infestation he adds.

As with all pesticides, it is not recommended for people to be nearby during the initial spraying.

In the case of Kenya, Tesfayohannes explains that the locusts are mostly on pasture land.

So farmers are notified in advance not to allow their animals to graze in certain areas for three to four days, but afterwards they can return with minimal problems.

Havoc caused by locusts
Apart from decimating food production, locust swarms can impede visibility especially when it comes to aircraft.

Just last week, a swarm of locusts hit an Ethiopian Airline plane en route to Dire Dawa from Djibouti. It had to land elsewhere for safety measures.

“The windscreen was completely blocked by locusts and you could see the bodies of locusts on the front of the fuselage of the aircraft and close to the engine parts,” details Cressman.

The locusts generally fly in the morning, between 10:00 am and 11:00 am explains Tesfayohannes.

And with the density of those locusts, “you hear some kind of vibrating, kind of sound. But you see them. These are huge…and everyone can see them.”

And a mass of insects, all several inches long, is hard to miss.