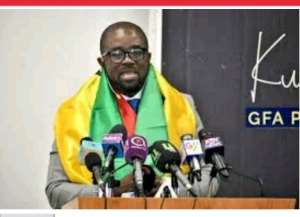 Let's twist the debate on the sanctions this way, on business perspective.

Kotoko commands the largest supporter base in Ghana. Five home matches ban will mean the many Kotoko fans must get news from the empty stadium via the Media. The biggest sponsor now, those given the media rights to broadcast the premier league must have means to rake in back their investments. And that means: have a larger viewership, listenership, and readership. One that attracts advertisements.

More money is needed in the premier league to match what we see elsewhere in Europe and America.

This is the time our beloved Kotoko makes us proud sitting behind our television sets, serving our five-match-ban, and listening to the radio commentary, or following via Social Media. The more they win, the more we get the larger share of the cash and the bragging rights.

If we're embracing the New World Order, it's time we learn football is not only about recruiting the finest players to win a match or a trophy. The business aspect in the game should be taught to the Kotoko fan who never accepts defeat.

Defeat is never glamorised in our mouths when it's Kotoko that we're talking about. It's Kotoko that makes we the fans sleep on empty stomachs when we're defeated in a game. Especially when it comes from our sworn foes, Accra Hearts of Oak.

On the contrary, football is not like yesteryears. Today, the football world over is managed by business gurus. The Masters who control the Betting and mastermind fixed matches.

The Media that will only need a particular player whose appearance on their screens and in their writings boosts sails and patronage.

The 21st-century football supporter should be aware of all what I've stated above. Armed with that, nothing will compel you to be rowdy and cause mayhem in the stadium unless you're hired by the warprenerus - those who benefit from causing wars and seeing souls lose their lives.

Not only the coffin makers and the mortuary attendants but the ugly blood thirsty witch that hinders the progress of Asante Kotoko.

To those people, we pour two bottles of schnapps before Sikadwa Kofi and summon you before our ancestors to answer why you don't want Kotoko to win this year's, Premier League.

Concluding, I believe also that we've not forgotten so soon when some players in a particular Club in Ghana were reported by their coach to have been Betting a lose game for the club that has employed them and paying them? And indeed that club kept on losing games and was relegated to the Division One?

Or, the recent Number 12 Exposé by Anas' Tiger Eye PI on the rot in Ghana football has not taught us any lesson?

It's like that everywhere. Follow the global game. Don't throw your heart too much into the game to the point of doing something nasty that will mar the beauty of the game and bring you in conflict with the law.

Blow power is not relished in this New World Order, but Brain Power is.

Throwing foreign materials onto the field of play does not serve anyone's good.

Kotoko players could have been injured too. One who throws a pebble into the crowd more times misses his gage and mark.

Let's not hang the new GFA Boss, Kurt Okraku for his supposed harsh decisions, though we're at the receiving end of the punitive measures. If Kotoko has been set as an example thus, it's a warning to others who will harbour such intentions. The scars of the May 9th Stadium Disaster has not yet healed.

Let's support and give the new boss the benefit of the doubts and see how he #BringBackTheLove of the game.