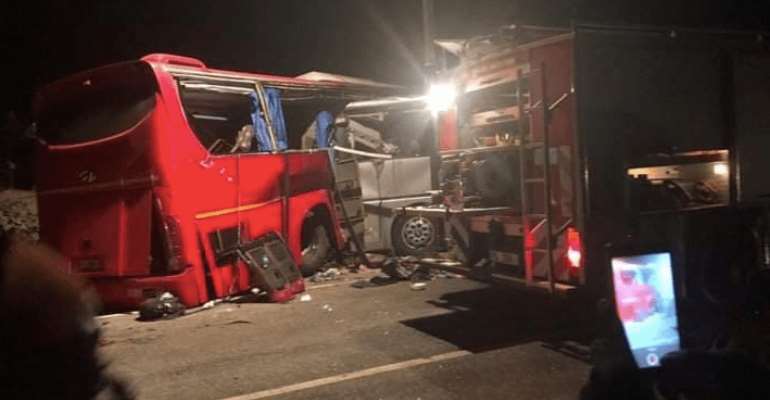 The Cape Coast teaching hospital says 29 of the 35 remains of persons who died in the Dampoase road crash last Tuesday have been identified by their families.

“Out of the 35 bodies, 29 have gone through the process of identification and a good number of them have been released to their families,” the Chief Executive Officer of the Cape Coast Teaching Hospital, Eric Kofi Gyedu, said to the media.

He was speaking during a visit by the ministers of Transport and Roads and Highways.

There are also nine women, some of whom require surgery and two children still on admission.

Mr, Gyedu expressed hope that “we will be able to contain the rest of the situation and come out of this very successfully.”

The deadly crash occurred when two buses collided at Dompoase near Elmina in the Central Region.

A driver of one of the buses involved, Mark Mireku, has been remanded into police custody.

The National Road Safety Authority is investigating the crash and has said its “multi-disciplinary” investigations are expected to inform the next line of “remedial actions and measures” to prevent future instances of such road crashes.

The Road Safety Authority also disclosed that plans are in place to efficiently regulate the operations of commercial road transport organisations.

The authority added that some 13,000 high-risk commercial drivers will be trained in an effort to prevent future occurrences of such fatal incidents.

The authority is also pushing for the development of a Legislative Instrument for the regulation of road transport operators.