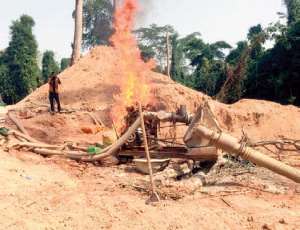 The massive destruction of the Oda River Forest Reserve in the Bekwai Forest District of the Ashanti Region by illegal miners has infuriated the Minister of Lands and Natural Resources, Kwaku Asomah-Cheremeh who waged a war against their activities.

The illegal miners believed to be Chinese, in collaboration with their supposed Ghanaian facilitators, are using heavy duty pieces of equipment, including excavators, to deplete the forest reserve without due care.

Upon seeing the gross destruction of the reserve on Thursday, the minister, who did not hide his indignation, ordered officials of the Forestry Commission to burn some mining equipment at two sites in the reserve.

The pieces of equipment were torched with the help of fuel and diesel in several gallons and tanks on site.

Fuel tanks belonging to the illegal miners were equally destroyed as the incensed minister declared that drastic punitive actions would be taken against those engaged in the galamsey.

The miners have already cut down several trees, including endangered ones and created pits in the reserve as they scan for gold.

Earlier, two Chinese were arrested on January 7, 2020 for mining in the reserve and released on bail. But the minister said more dramatic actions were required in fighting the illegal miners.

The forest reserve derives its name from the Oda River that drains through the reserve.

It lies within the Southwest corridor of the Bekwai Forest District.

The Oda River Forest Reserve is U-shaped with a flattered base running northwards.

Following a Cabinet directive, mining in forest reserves in Ghana is an illegal act.

Mr. Asomah-Cheremeh said the New Patriotic Party (NPP) government was committed to the fight against illegal mining and reminded those interested in mining, be it small scale, to go through the prescribed legal process.

How Much Did You Get From Selling Missing Excavators? A.B.A ...
7 hours ago

No Reasonable Ghanaian Will Vote For Mahama Again--Kofi Akpa...
8 hours ago