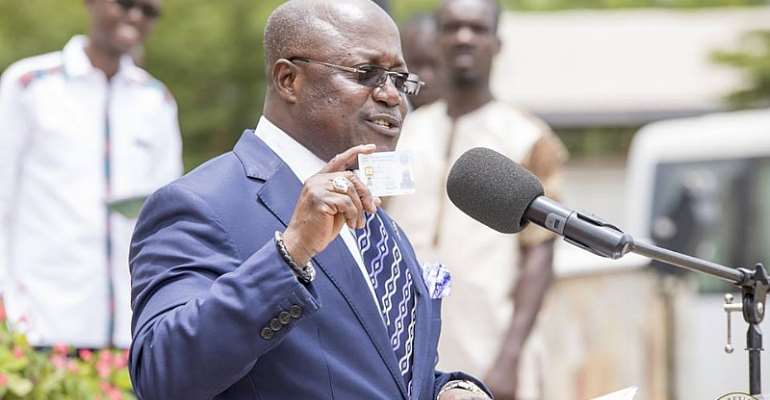 As the debate for and against the compilation of a new electoral register intensifies, as the Executive Secretary of the National Identification Authority, Professor Kenneth Agyemang Attafuah, says his outfit has all the data the Electoral Commission might need for a credible register.

Professor Attafuah said the NIA has so far registered 7.2 million people which is more than 50% the voting population of Ghana adding that the EC which has the constitutional mandate can decide to adopt the NIA's scientific data or even use the Ghana Card as the voting card when it successfully completes its registration by 30th March 2020.

Professor Attafuah who was briefing journalists in Takoradi on the Western, Western-North and Central regions' scheduled Ghana Card registration exercise slated for 27th January to 18th February said it can provide the Electoral Commission with all the data set within five days.

“We have registered over 7.2 million people as of 15th January 2018. That is more than 50 percent of the voting population. Secondly, 94 percent of those that we have registered are 18-years-old or will be 18 by voting date. So already we have over 50 percent of the population that will vote captured and we have everything that the Electoral Commission might want to ask of citizens for purposes of voting, except polling station numbers or centres. But that is as easy as ABC technically speaking and NIA has the capacity to give to the EC all the data sets of all the people who are 18 years and above. We can transfer all the millions of that data set in a maximum of five days”.

The Executive Secretary of the NIA further explained why the famously discussed EC's proposed new voter register must give way for the credible data the NIA has already compiled and continue to compile.

He said because the NIA had captured enough data including fingerprints, iris and other details the EC might want, with the exception of polling station numbers, then “there is no need to duplicate or replicate” such data since “there is no constitutional barrier to the EC’s use of the NIA database for the extraction of a national voter register.”

“If the EC were to come to the conclusion that the constitutional provision that it shall issue ID card could be interpreted purposively to include the notion that it can prescribe what document should be used as valid, then perhaps the Ghana Card could be considered as a valid instrument for voting,” Prof. Attafuah noted.

The Head of Corporate Affairs at the NIA, ACI Francis Palmdeti also addressing concerns raised about vulnerable groups who might not be able to generate the digital address which is a key requirement for the Western, Western-North regions registration revealed that a large number of people who have already registered for the Ghana Card are the vulnerable ones including farmers from the countryside.

A GHS390 million budgetary allocation has been approved for the EC to compile a new voters’ register ahead of the upcoming general elections later in 2020.