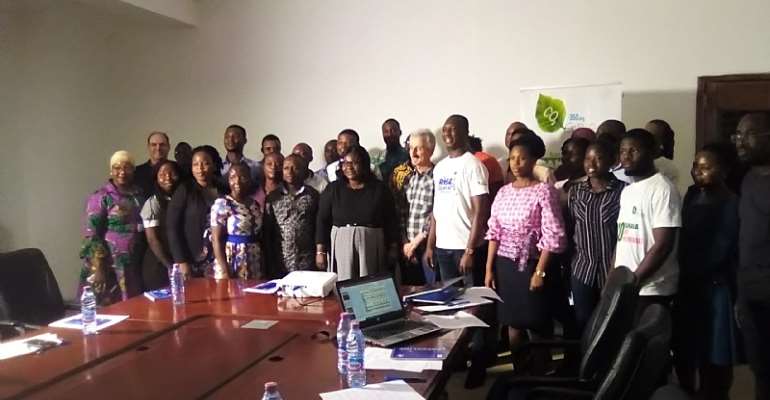 The 350 Ghana Reducing Our Carbon (GROC) has held a workshop on integrating Renewable Energy (RE) plans into the Ayawaso West Municipal Assembly in its effort to support the government’s Renewable Energy programme.

The Non-Governmental Organization (NGO) which is a local Chapter of 350.org in the United States as part of a pilot exercise has chosen 5 districts in the Greater Accra Region to support them in contributing to the government’s RE programme through mainstreaming RE in their medium-term development plan.

The workshop was held on January 14, 2020 at the office of the Ayawaso West Assembly at Dzorwulu, Accra as the first Assembly among the 5 selected districts.

The country Coordinator for 350 GROC, Chibeze Ezekiel stated that “…we campaign against carbon emissions…we promote more of RE to support government’s initiative. Once there is demand and people are aware, it will trigger the supply side. So as NGOs, we keep advocating and implementing RE in various communities in the country.”

According to him, based on the 5 districts’ engagement, the exercise is expected to be extended to the other districts in the country. The report after the exercise will be presented to the government, private sector, donor agencies to study what they did in the 5 districts for onward consideration so as to extend to the remaining districts.

Solomon Yamoah, the executive member of GROC disclosed that “We are planning to have 10 percent RE in our energy mix. In doing those things, we have to come together and if it is being implemented by the Local Authorities, it can trickle down to everybody. It is about time we also look into technology to diversify our energy consumption.”

The Chief Executive of Ayawaso West Municipal Assembly, Sandra Owusu Ahinkorah said the Assembly is delighted to partner with 350 GROC to discuss the development of a plan that will incorporate RE and encourage the introduction and adoption of RE technologies within their medium-term development plan for the Municipality.

Mr. Kofi Simpeh, development planning officer of the Assembly express delight for being chosen by GROC to do the RE programme. "We are looking forward to working with them. When you look at our medium term plan, it is very key right from national to the local which we are mandated to carry out such activities. So the intervention of GROC will be an addition. And it is going to help and promote Climate Change and RE. They are going to augment what is already in the system and we are very happy.”