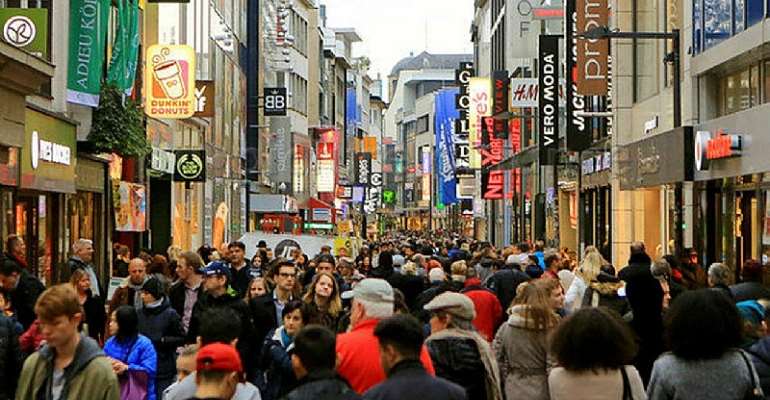 Actually, more people die in Germany every year than are born, yet the population is growing. The reason for this is the so-called net immigration. Germany has more inhabitants than ever before.

With 83.2 million, the number reached a peak last year, as the Federal Office of Statistics announced on Friday after an initial estimate.

The increase is exclusively due to so-called net immigration: Last year, between 300,000 and 350,000 more people moved to Germany than from here to other countries. "Without migration gains, the population would have already been shrinking since 1972, as more people have died than were born every year since then," emphasised the statisticians. According to the estimate, there were 770,000 to 790,000 born in 2019, but 920,000 to 940,000 died.

The German economy is dependent on immigration. The Federal Statistical Office assumes that the employable population will shrink by around four to six million by 2035. The shortage of skilled workers, which is already deplored in many sectors, is likely to increase as a result. The Federal Government, therefore, intends to attract more skilled workers from abroad. To this end, the Skilled Workers Immigration Act will come into force in March, which is intended to give skilled workers from outside the EU better access to the German labour market.

What factors influence the size of the population?

What is the reason for the increase in population?

In its estimate, the Federal Office assumes that the number of births has increased moderately compared to 2017, while the number of deaths has increased noticeably. According to this estimate, 785,000 to 805,000 births and 950,000 to 970,000 deaths are expected in 2018. This means that there is an increased birth deficit of about 150,000 to 180,000, so the reason for the population increase lies elsewhere.

The increase is attributed to migration gains that exceed the birth deficit. Migration gains are the difference between people who immigrate from a country within a year and those who emigrate during this period.

The so-called migration balance of people moving to and from Germany is said to be between 340,000 and 380,000. In 2017, 416,000 more people had come to Germany than had left. The net migration would thus decline for the third year in a row after the extremely high level of immigration in 2015, and fall to around the level of 2012.

The Federal Statistical Office's estimate is based on monthly data already available for births and deaths up to and including September 2018 and for arrivals and departures up to and including August 2018. The figures for the remaining months of the previous year were added, final results will be published in the summer.

How will the population size develop in the future?

In future, it is to be expected that the number of deaths will continue to rise despite rising life expectancy as the numerically strong cohorts of the baby boom generation grow into old age. At the same time, the number of potential mothers is expected to decline over the next 20 years, as the weakly represented 1990s cohorts enter the childbearing age phase. This means that even with a slightly rising birth rate, the number of births would decline in the medium term. The difference between those born and those who have died will therefore increase. A growing or even stable population would then require ever greater net immigration.

The population of working age will shrink particularly sharply: according to the forecast, the number of 20 to 64-year-olds will decline significantly from 2020 onwards and, depending on the level of net immigration, will be around 34 or 38 million in 2060. The proportion of 20 to 64-year-olds will fall from 61 percent in 2013 to just over 50 percent in 2060, which is why experts say Germany will continue to focus on immigration into the labour market.

Government to reclaim mined-out areas in Ghana
53 minutes ago