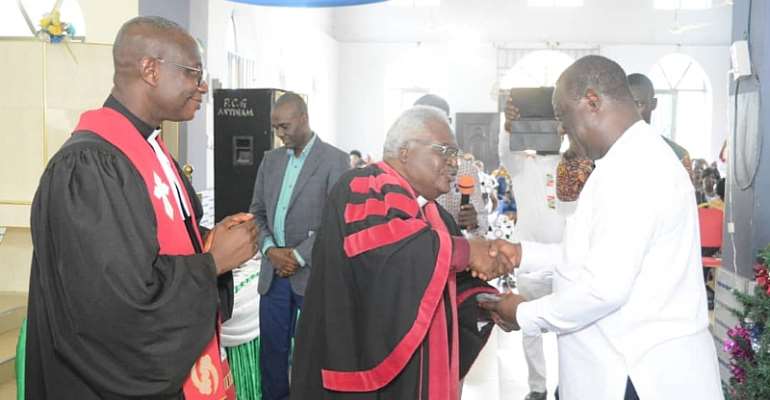 The Akyem Abuakwa Presbytery of the Presbyterian Church of Ghana (PCG) has honoured 40 eminent members who have contributed immensely to the growth of the church.

At an event that took place at Akyem Anyinam Presbyterian Church in the Fanteakwa South Municipality of the Eastern Region, a total number of 240 people have been awarded.

The awardees were presented with a well-crafted desktop plaque in recognition of their ‘unflinching’ support towards the growth of the Akyem Abuakwa Presbytery.

Speaking at the event, Mr. Amoako Atta expressed delight on behalf of all honourees in the decision by the church to recognize the good works of its members and also commending them for the honour.

“The plaque given to us is valuable than anything in life because it is the word of God. The plaque brings peace and salvation to we the awardees. This award marks the beginning of good things to happen and as we worship the Lord we have to do individual introspection”, he said.

He called on Ghanaians to be honest in whatever they do and also use their various offices to help improve the country through God-fearing deeds.

Commenting on the upcoming general elections. he entreated the congregation to pray for peace as the electioneering process draws closer.

He then poured cold waters on the new registers voter as he believes the best decision will be taken, saying that if we want democracy to function well in the country Ghanaians should be tolerant and accept diverse views from every sector.

“I believe Ghana belongs to God but not any political party. So whatever that is going on we should support with prayers. There has not been any civil war in the country and I believe civil war will never happen here” he ended.

The Deputy Finance Minister, Abena Osei Asare also expressed gratitude to the church for honouring it heroes and has therefore called on the people to leave a legacy to benefit the younger generation as the president following the implementation of the flagship free SHS policy.

She then called on the people vote for the President, Nana Akuffo Addo and his New Patriotic Party (NPP) government for them to continue the good work they are doing.

The Akyem Abuakwa Presbytery Chairperson, Rev. Dr. Seth Kissi, said the church would continue to partner the government to develop the country.

He stated that the church was doing a lot in the provision of education, health, agriculture, and other social initiatives to living better for the people.