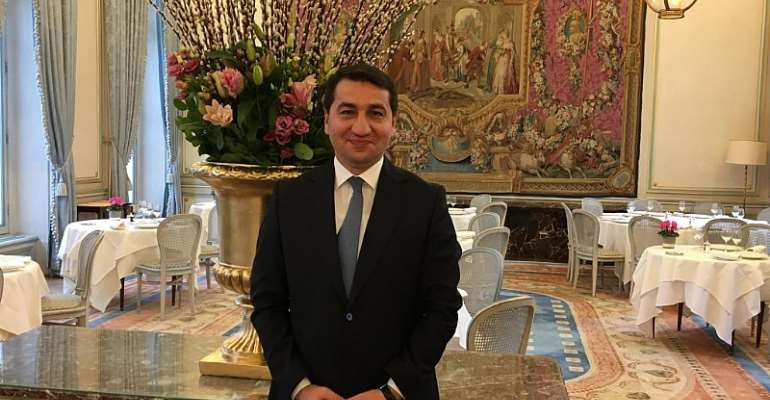 Azerbaijan is considering plans to join French military efforts in Africa's Sahel region, according to one of the country's top official, as France looks to EU allies to shore up local forces who are being increasingly targeted by deadly jihadist attacks.

"Azerbaijan is ready to start such kind of discussions with our potential partners, but we need more knowledge and expertise," Hikmet Hadjiyev, Assistant of the President of Azerbaijan told RFI.

The presidential advisor was speaking ahead of this week's G5 Sahel summit in Pau that concluded with France and five West African countries pledging to step up their cooperation to fight against terrorism in the vast sub-Saharan expanse.

Azerbaijan, located in the southern Caucasus and sandwiched between Russia, Turkey, and Iran, has been helping Nato countries in the war on terror in Afghanistan and indications are that it might be tempted to join French military efforts in the Sahel.

"Azerbaijan has a peacekeeping potential," continued Hadjiyev. "Our officers have been deployed to South Sudan and engage in humanitarian efforts on the African continent," he said.

With the right proposal, the Eurasian country hints that France may call upon it. Paris is currently struggling to find European allies to be part of the new Takuba task force, a separate entity to its Barkhane operation.

Costly support
Such support will not come cheap. Azerbaijan is looking to France to help it resolve an ongoing conflict of its own--the long-running Nagorno-Karabakh conflict--which has pitted Baku against its neighbour Armenia.

"There should be strong demand, political diplomatic pressure by co-chair countries [including France], they should demand from Armenia to fulfil its obligations under international law," insisted Hadjiyev.

France is one of the three co-chairs of the OSCE Minsk Group, which aims to settle the border dispute in the region of Nagorno-Karabakh that has claimed an estimated 30,000 lives and displaced hundreds of thousands of people.

The conflict began in the final throes of the Soviet Union when Armenia occupied the Nagorno-Karabakh region--an ethnic Armenian enclave--and seven surrounding areas.

Armenian leaders have eagerly advocated for Armenians to move into the region, viewing Karabakh as their historic homeland.

A ceasefire was called in 1994, but decades of internationally mediated negotiations with the OSCE's Minsk Group have failed to result in a resolution.

"Our appeal to the international community, including the OSCE Minsk Co-Chair countries, is that they should redouble their efforts for the soonest resolution of the conflict based on the norms and principles of international law," Hadjiyev said.

"Military occupation is illegal."
In crossfire of US-Iran conflict
Security is likely to be one of the issues on the agenda when French President Emmanuel Macron travels to Ajzerbaijan later this year.

His trip was expected to take place as early as next month, but experts say the geopolitical tensions in the Middle East triggered by the US-Iran conflict have made a trip to the South Caucasus risky.

Hadjiyev himself reckons there is a "strong potential for the confrontation between Iran and the United States to get worse," a situation which could have a direct impact on Azerbaijani nationals living in Iran.

Baku maintains "friendly" relations with Tehran, with whom it shares "traditions and cultural contacts." It enjoys diplomatic relations too with the United States, and has succeeded in getting along with countries who are at each other's throats through its non-alignment approach and efforts to "build cooperation" with its partners.

France is a partner of choice, comments Hadjiyev.
"Macron has an open invitation to Azerbaijan. Previous French presidents: Nicolas Sarkozy, François Hollande have visited Baku, and my President Ilham Aliyev came to France [in July 2018]," he said, describing the French-Azerbaijani relationship as a "love story."

"We are open to criticism, there is no perfect country," presidential advisor Hadjiyev responded.

"Azerbaijan's independence has been a 25-26 year process. In the 1990s, the country was almost a failed state and on the threshold of war. But where is it now? It is a mid-income European country, and stable in an island of instability."

This notwithstanding, the oil-producing former Soviet republic on the Caspian Sea has come under criticism from the EU Commissioner for human rights for failing to protect freedom of expression.

There are hopes that next month's snap elections on 9 February will open up the democratic space. President Aliyev and his father Heydar before him have dominated Azerbaijini politics.

"In the election, 19 parties are taking part in the electoral process," said Hadjiyev dismissing claims the elections are orchestrated.

"Human rights should not be turned into a political instrument, we're against that. But we are ready for a constructive engagement," he said.