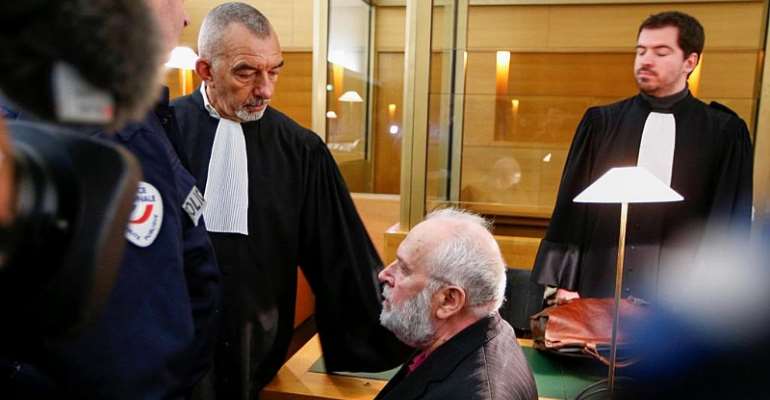 Bernard Preynat, a former Catholic Priest accused of sexually abusing dozens of boy scouts in the 1970s and 80s is on trial. In court he claimed that he himself was a victim. For Catholic activist and journalist Christine Pedotti, this trial, and that of the Bishop who covered up the abuse, reveals a systemic problem in the French Catholic Church, which has its roots in the masculine domination of the clergy.

The trial of Preynat and that of Bishop Barbarin are part of the biggest crisis in the French Church in decades.

Christine Pedotti, the editor of the weekly Catholic newspaper Témoignage Chrétien, was part of a group calling for a commission to look into the wider problem of sex abuse in the Church. The Catholic Church set up an independent commission in February 2019, and has so far collected over 2000 stories.

(Below is an extended version of an interview that you can hear in the Spotlight on France podcast. Subscribe here on iTunes, or Google Podcasts.)

Q: You are active as a feminist, and have questionned how the Church approaches the issue of women, and sexuality and homosexuality. How is this current crisis of sex abuse a feminist issue?

Christine Pedotti: I see the issue of paedophilia as a symptom of an inward-focused, masculine clerical culture, in which sexuality is always seen as a sin.

The Catholic Church doesn't know how to talk about sexuality, because it's incapable of seeing women as desirable. That's where this meets feminism.

Q: How has France approached the issue of sex abuse by priests differently from elsewhere?

CP: France is France, so we think we're exceptional. This was happening everywhere else: in Canada, in the US, in Australia, Germany, Austria, Ireland, Poland, Chile. France thought the problem would stop at our borders.

The French church had to realize it had a problem, and it wasn't an exception. That's a difficult realization. It's difficult to come to terms that this happened in France just like everywhere else. That four Bishops of Lyon, one after the other, closed their eyes on this priest [Preynat], who everyone knew was a criminal.

Q: Some people have turned away from the Church because of these paedophilia scandals. Have you ever been tempted to give it up?

CP: Many people ask why not become Protestant? First, I don't think things are any better in that Church. And second, it would be like changing countries or nationalities. That's not easy to do.

I grew up Catholic, and am imbibed by Catholic history and culture. It interests me a lot. So I stay with it, and try to change it. I created an association whose mission is: “neither leave, nor stay quiet”. And I talk, and I bother the Bishops.

A French newspaper called me a “pain in the ass for church people”. I think it's rather a compliment!

Q: Preynat is on trial, Barbarin was convicted last year. There is a growing awareness of this problem in the French Catholic Church. Are things changing as a result?

CP: I am hopeful, but Pope Francis has pointed out the main issue, which I agree with (I love saying that the Pope and I agree!). The issue is clericalism and the isolation of the priest, as sacred, and separate. How do we fight against this feeling of exceptionalism that priests have?

This is not just a French issue, it's an issue for the Catholic Church as a whole. Who are these men – because they are exclusively men, and celibate - who have a special rapport with the divine? It's very strange, and rather archaic. It puts the Catholic Church in a rather uncomfortable position.

Q: Your work has often been on the margins of the mainstream approach to Catholicism. You have focused on taboos subjects. How have these sex scandals, and the reactions to them, changed the way people see your work?

CP: Today I'm invited to conferences more than before. People are starting to see that that what I've been saying for a long time is true. It's almost an oxymoron to say you're Catholic and feminist. It seems impossible. Today, some people are saying: Maybe she's right - not just me, but a certain number of Catholics who take very disruptive positions.

Today I can say that there are points on which I agree with the Pope! Not on the issue of women, but on some issues we have a common analysis - so I'm less marginalised.

I think many people agree with me that there was a real error in what Pope John-Paul II did, to focus the church on the Priest, male, celibate, as sacred. And placing women as mothers, wives, reserved and quiet like the Virgin Mary.

Q: You speak about the lack of credibility in the French church. Will these alternative ways of thinking attract people back to Catholicism in France?

CP: That's complicated to say. Today the French Catholic Church is fragile. It receives no public funds, and donations have gone down. It's a complicated crisis, because it comes from inside.

So to know what will happen, is a real question. I still believe in the religion, and there are resources in faith. But we are moving towards a smaller Church. The Church and power went hand-in-hand over the centuries. This was probably an error. Now we have to unlearn what we've done since Constantine, which was 16 centuries ago. So there's a ways to go.

Catholicism counts a lot on its pope. Pope Francis is not young. It will be interesting to see how those in power, across the world, will choose who will replace him. Will they decide on conservatism, to avoid change? Or will they say that in order to announce the gospel in the 21st, we need to change something?

This interview is part of the Spotlight on France podcast.